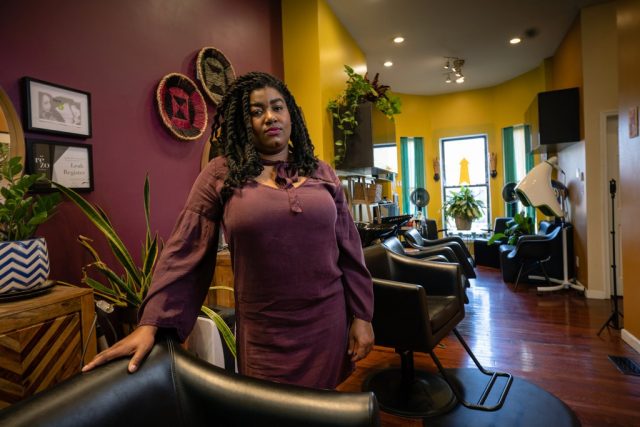 Minority business owners have always struggled to secure bank loans. Now, many banks want to deal only with existing customers when making loans through the government’s $349 billion aid package.

Yasmine Young, owner of Diaspora Salon, which she established in 2015 without any loans. She joined a lawsuit against Bank of America filed by borrowers whom the bank turned away because they had credit cards from other banks.

Yasmine Young, owner of Diaspora Salon, which she established in 2015 without any loans. She joined a lawsuit against Bank of America filed by borrowers whom the bank turned away because they had credit

Four years ago, Yasmine Young walked down the street from Diaspora Salon, the business she owns in Baltimore, to the Bank of America branch where she has a business checking account. She was thinking of getting a credit card, but when a banker there described the requirements she would have to meet to qualify for one, Ms. Young says she left feeling too discouraged to apply.

She eventually got a card from Capital One, never thinking that the decision would one day bring her to the brink of disaster.

After she was forced to temporarily close Diaspora because of the coronavirus pandemic, Ms. Young tried to get an emergency loan under the federal government’s $349 billion relief program for small businesses. But Bank of America, one of the biggest banks participating in the program, refused to consider her application. Because Ms. Young had a credit card from Capital One, Bank of America said, Capital One was her primary bank. And Capital One was not yet accepting emergency relief loan applications. As of Friday, a week after the program was started, Capital One’s website still advised borrowers to keep checking back for updates and said its online application would be available “shortly.”

Ms. Young is among the thousands of small-business owners at risk of being shut out of the government effort, known as the Paycheck Protection Program, because of limits set by lenders grappling with overwhelming demand. These loans, which do not have to be repaid if the money is used for payroll, rent or mortgage expenses, could be a lifeline for struggling businesses — if they can get them.

And for small-business owners like Ms. Young, who is black, the hurdles could be much higher. That’s because minority-owned businesses often have weaker banking relationships than their white-owned counterparts — one legacy of the practice of redlining, or refusing to lend to people in communities of color. Research shows that black and Latino business owners are denied loans at higher rates.

Anticipating that minority business owners could struggle to tap federal aid, some lawmakers are proposing ways to earmark additional funds specifically for minority-owned businesses. And on Wednesday, a group of prominent black investors, including John W. Rogers Jr., the billionaire co-chief executive of Ariel Investments, a mutual fund manager, sent a letter to lawmakers expressing concern that the emergency loan program was already leaving black borrowers behind.

A 2016 study by economists at the Stanford Institute for Economic Policy Research found that only 1 percent of black business owners get a bank loan during their first year of business compared with 7 percent of white owners. Twice as many white business owners — 30 percent of the total — use business credit cards during their inaugural year, compared with black owners, among whom only 15 percent rely on a credit card. Black businesses also start out with far less capital — whether from investments or bank loans — than white businesses, the study found.

“Black-owned businesses continue to rely on family loans to a greater degree than white-owned firms in the three years following the firm’s founding,” the researchers found. “This suggests that access to formal debt channels remains limited for minorities.”

The institutions that frequently lend to minority-owned businesses, especially those in low-income neighbourhoods, are nonprofit organizations called Community Development Financial Institutions. They rely on government funding and charitable donations to make loans, and grew out of earlier efforts to help African-Americans build wealth in the wake of slavery and segregation.

However, only 78 of 950 such organizations are participating in the government program, according to a Treasury spokesman. The rest do not have authorization to participate because they have not previously been approved by the Small Business Administration to make loans backed by the agency. Their representatives say they do not yet have clarity from the government on how to get that approval quickly enough to participate in the emergency program.

On Monday, the leaders of the Opportunity Finance Network, a group that represents the community development organizations, met with Treasury officials to suggest ways that the government could quickly approve the lenders for the program. But later, in a statement posted on its website, the group said that Treasury officials were “noncommittal” about what, if any, actions they would take in response to the group’s recommendations. A Treasury spokesman did not provide a timeline for when more community organizations might be approved to participate.

Sign up to receive our daily Coronavirus Briefing, an informed guide with the latest developments and expert advice.
Sign Up
In their letter, the group of black investors, including Ariel’s co-chief executive Mellody Hobson, who serves on the board of JPMorgan Chase, proposed that a quarter of the $250 billion in additional money for small businesses that Congress is considering adding to the program be set aside for black businesses.

“This roughly $68 billion will only begin to address the disparities within capitalism brought into relief by coronavirus,” they wrote. “By prioritizing clients that already have existing lines of credit, black businesses and nonprofits find themselves yet again excluded from live-saving relief.”

Some federal lawmakers have proposed that part of the second stimulus could be directed to local business development organizations that focus specifically on helping minority businesses so that they can hire lawyers and offer advice to minority-owned businesses about how to get help during the pandemic. The $2 trillion CARES Act allotted $10 million for minority chambers, but some lawmakers say that is far from enough.

During a call on Wednesday with Vice President Mike Pence, members of the Congressional Black Caucus expressed concern that funds from the program were not reaching black business owners, according to Representative Emanuel Cleaver II, Democrat of Missouri and a caucus member who was briefed on the call after it took place. Mr. Pence said that the program had gotten off to a shaky start in general, Mr. Cleaver said.

“He did admit that they had had some difficulty,” Mr. Cleaver said. “The fear now is that if we don’t act quickly, by the time we get the help for minority businesses by way of having advisers through minority chambers, the fear is the money will be exhausted.”

A spokeswoman for Mr. Pence did not return a call seeking comment.

Racial discrimination in banking is outlawed on paper, but it continues in practice — often in subtle forms. In 2018, for instance, the National Community Reinvestment Coalition, a nonprofit organization that works with banks to increase the flow of private capital into poor and underserved communities, sent “mystery shoppers” to 32 different banks in Los Angeles. It found that potential borrowers with identical financial profiles were treated differently by bankers based on their race. Black and Latino borrowers were asked for more detailed financial documents and were given less information about many banks’ available products than white borrowers.

Some minority business owners have avoided dealing with banks entirely. When Carlos Swepson, a chef in New York, wanted to start a restaurant, he borrowed $240,000 from his parents, who mortgaged their house to lend him the money. Later, when he wanted to expand, Mr. Swepson raised $400,000 from friends, one of whom also took out a mortgage. Another borrowed against a retirement account to fund him.

Ms. Young, too, started Diaspora without any kind of bank loan, going so far as to learn plumbing techniques from her uncle so that she could install her own shampoo bowl. Her mother helped her paint and decorate the space. She built her own website. When she had to hire an assistant, she researched employment law. Money she earned doing customers’ hair went right back into the salon to pay for things like another styling station, a janitor and a contracted bookkeeper.

Two years after she gave up trying to get a credit card through Bank of America in 2016, a friend told her about the Capital One Spark Card, explaining what terms like “cash back” and “rewards” meant, and helped her apply.

(Ms. Young, now 35, had one credit card for three years during college but had canceled it when her financial situation worsened. Because she had not taken out any kind of loan since, Ms. Young said she had no recent credit history.)

“We have received and are processing more than 250,000 applications from small businesses around the country,” said Bill Halldin, a Bank of America spokesman. He said the bank’s position was that Ms. Young had a lending relationship elsewhere and that it was “unfortunate” that the lender had not started taking applications under the program when Bank of America turned her away.

This week, Ms. Young joined a lawsuit against Bank of America filed by borrowers whom the bank turned away because they had credit cards from other banks. By joining the lawsuit, which is seeking class-action status, she met another Baltimore-based business owner, Amy Elias, who helped her apply for a government-backed loan through Fundera. Fundera is is an online marketplace that helps small businesses find loans. She is awaiting the outcome of the application.