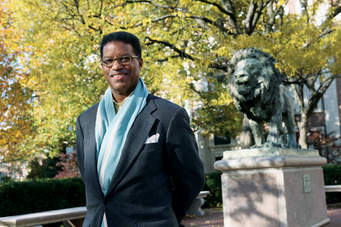 George Van Amson does not speak Spanish. But he is fluent in the heady language of finance. And his facility has made the Goldman, Sachs & Co. senior international equities trader a vital point guard in one of the world’s hottest capital markets: Latin America. In fact, last year Van Amson, 40, was crucial to several of his firm’s most significant international transactions as changing economic and political forces made the Latin American market a primary target for institutional and private investors. The deals include Goldman Sachs’ coordination of a $2.2 billion global secondary offering for Telefonos de Mexico, one of the largest international deals of the year.

Van Amson also was instrumental in an $863 million global equity offering for Grupo Televisa, the second-largest equity offering and the largest initial public offering ever for a Mexican company. Last March, he participated in a stock issue of 3.6 million shares for Sears, Roebuck and Co. of Mexico. The result: Goldman Sachs ranks as the leader for underwriting Latin American issues.

When English is the financial language of the world, not speaking Spanish is a nonissue, says Van Amson, who also specializes in trading Canadian and precious-metal stockworldwide. The 10-yeartrading-floor veteran also disagrees with the notion that traders are like gamblers. He says, “Trading requi res extraordinary discipline; you need to be able to synthesize an im – mense amount of information in a short time, and then make a decision and be right more often than you’re wrong. You also have to understand a variety of cultures and customs. There’s a language to trading that doesn’t necessarilytranslate from one country to another.”

The Bronx native understands how corporate cultures differ. After graduating from Columbia University in 1974 with an economics degree, Van Amson worked for an industrial company and a bank before becoming an analyst in Goldman Sach’s controller’s office. In 1980, he entered the Harvard Business School. Two years later, he returned to Goldman Sachs after graduating from Harvard with honors.

The complexity and volatility of international trading attracted Van Amson immediately. “Staying at the top of this field requires boldness and the ability to inspire confidence, usually long-distance. You also have to be humble enough to know when you’re wrong and then change directions quickly,” he says.

It is difficult for Van Amson to target precisely when his career as an international trader at Goldman Sachs took flight. “One year you’re a new associate and you’re asking everyone what to do and then, one day you look up and there are three new associates asking you what to do. It’s hard to pinpoint when that transition took place,” he explains.

Clearly, Van Amson was right more often than not. In 1986, he was promoted to vice president, and in 1989 he became leader of an emerging market group. Having survived the downsizing that followed the Wall Street crash and with Latin America booming, Van Amson’s career is climbing. An unexpected event could send his Latin accounts off course. But, says Van Amson, “That’s what makes it so exciting.”