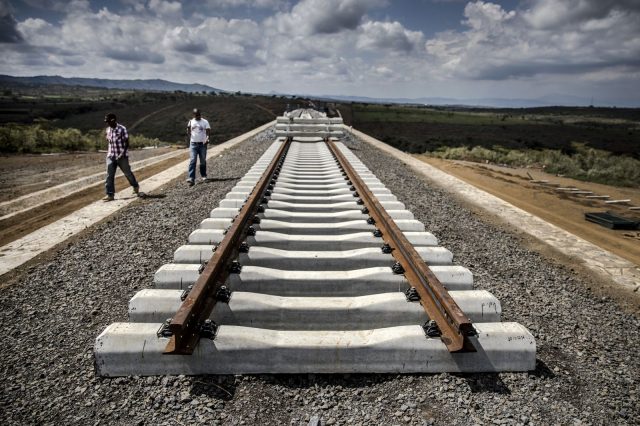 The end of the railway in Duka Moja, Kenya.
China’s Built a Railroad to Nowhere in Kenya
Beijing is withholding the $4.9 billion needed to finish the project, once a flagship for Xi Jinping’s Belt and Road initiative.

Gleaming concrete sleepers run across a new railway bridge in Kenya, the latest stretch of a Chinese-built line from the coast all the way to Uganda.

Only, it doesn’t quite reach the border. Instead, the railroad ends abruptly by a sleepy village about 75 miles west of the Kenyan capital, Nairobi, the tracks laid but unused.

Construction of what was intended to be a flagship infrastructure project for Eastern Africa was halted earlier this year after China withheld some $4.9 billion in funding needed to allow the line’s completion. Beijing’s sudden financial reticence appeared to catch the governments of Kenya and Uganda off guard: Both may now be forced to reinstate a colonial-era line in a bid to patch the link and boost regional trade.

The reason for China’s attack of cold feet may lie in the project’s high profile. Chinese state media repeatedly used the Mombasa-Nairobi Standard Gauge Railway (SGR) project as a showcase for President Xi Jinping’s Belt and Road Initiative. But with concerns rising globally that Belt and Road was loading poorer nations with unsustainable debt, Xi signaled in April that Beijing would exert more control over projects and tighten oversight.

That extra rigor is beginning to be felt worldwide. A planned light-railway system that was the most high profile belt and road project in Kazakhstan is on hold after the collapse of a local bank that handled Chinese funds. In Zimbabwe, a giant solar project hit a funding shortfall after the Export Import Bank of China backed out of providing financing due to the Zimbabwean government’s legacy debts, RWR Belt and Road Monitor reported this month. Kenya’s line may be next.

The Chinese “are adopting a more cautious approach to their debt exposure in Africa,” said Piers Dawson, a consultant at London-based investment consultancy Africa Matters Ltd. He cites “increased noise around its sustainability and potential default.”

China is now the single largest financier for infrastructure in Africa, funding one-in-five projects and constructing every third one, according to a Deloitte report. With infrastructure needs that the African Development Bank estimates at $130 billion to $170 billion yearly, governments are only too willing to take out Chinese loans to plug the funding gap.

The downside is that Kenya was one of three African countries identified in a March 2018 report by the Washington-based Center for Global Development as at risk of debt distress as a result of its Belt and Road participation. The others were Egypt and Ethiopia.

Belt And Road Initiative Bolsters China’s Africa Ties
A freight train departs from the port station on the Mombasa-Nairobi Standard Gauge Railway (SGR) line.
Photographer: Luis Tato/Bloomberg
“China has its own issues it’s dealing with, including perceptions that it is ‘trapping’ many of its Belt and Road partners by drowning them in debt,” said Jacques Nel, an economist at NKC African Economics. China’s government has “put the brakes on its external expansion plans, or has at least become more focused on the viability of projects due to its own corporate debt concerns,” he said.

The first half of the Kenya-Uganda railway, a 470-kilometer (290-mile) stretch between the port city of Mombasa and Nairobi, is operational but not yet making money. Beijing balked at funding the extension to Uganda amid concerns it may be a step too far beyond viability.

Kenya and landlocked Uganda had coordinated their plans for the new railway to reduce transport costs and the time it takes to move goods from the coast across each country and further into the eastern and central Africa hinterland. Yet with the realization that China may not release more funds, Kenyan President Uhuru Kenyatta has given the go ahead to link the line to a narrower-gauge railway that’s over 90 years old. Uganda, which had banked on Chinese funding too, has decided to refurbish the colonial-era line on its side of the border.

But that still means shouldering more debt at a time when the International Monetary Fund is urging spending restraint. China is already Kenya’s biggest external creditor, with some 22% of the country’s external debt as of December, according to Treasury data.

The situation doesn’t bode well for Kenyatta’s legacy, which he was building around the railroad as the nation’s single-biggest investment since Kenya attained self-rule over five decades ago. Knowing that alternative—and probably more expensive—debt could further widen Kenya’s deficit, Kenyatta is courting private investors to build the link between the new and old railroads. Uganda will meanwhile include the $205 million needed to rehabilitate its old tracks in the budget, but hasn’t said how it plans to raise the funds.

Back in 2013, when Kenyatta asked Beijing to fund the railway, a condition was that China supply the constructors. Export-Import Bank of China financed the $3.6 billion line to Nairobi, China Road and Bridge Corp. built it, and China Communications Construction Co. was picked as the operator. Revenue from the railway is supposed to repay the loan, but critics say the cost was too high and it won’t turn a profit for a long time.

They point to southern neighbor Tanzania, which in 2016 canceled $7.6 billion in Chinese funding for a 2,200-kilometer railway and contracted Yapi Merkezi Insaat Ve Sanayi of Turkey and Portugal’s Engenharie and Construcao Africa to build a shorter line at roughly half the cost per kilometer.

Beijing’s tighter scrutiny of Belt and Road projects comes as China shifts the program away from low-cost loans onto a more commercial basis involving its private sector. Clearer rules for state-owned enterprises and building overseas auditing and anti-corruption mechanisms were among other steps floated by officials at the time of the Belt and Road Forum in April.

China supports the Kenya railway project but requires a reasonable and sustainable financing plan, according to a person involved with the project. Because China now requires high-quality projects and a more thorough feasibility study, the process of approving loans has slowed in general, but it doesn’t mean the project is terminated, said the person, who asked not to be named as they are not authorized to speak publicly. Related parties in the Chinese government and banks are still deliberating financing options, the person said.

China’s Ambassador to Kenya, Wu Peng, was asked in May by local newspaper the Daily Nation about expectations President Kenyatta’s visit to China that month would secure funding for the missing section of the railway, to Kisumu by Lake Victoria.

“I really don’t know where those expectations came from,” Wu was cited as saying.

— With assistance by Kenneth Karuri, Fred Ojambo, and Hayley Warren

Serena Williams – the Greatest of All Time