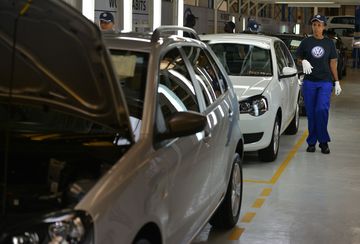 The writer: Noah Smith
Date first published: 3 June 2019
When people tell me that Africa will be the new China, I’m not as incredulous as I used to be. The continent is showing potential, and progress could come from what many consider to be a highly unlikely area: manufacturing.
All across Africa, investors — many of them private entrepreneurs from China — are building factories. Others from India, Sri Lanka, and Bangladesh are joining in, while car companies from Japan, Germany, and South Korea are declaring their intent to put assembly plants in places such as Ethiopia, Tanzania, and Ghana. Meanwhile, overall African growth is looking impressive. The International Monetary Fund forecasts that 6 of the top 10 fastest-growing economies will be African this year.
Manufacturing is only one factor. A recovery in natural resource prices and urbanization (which creates more demand for local services) also play important roles. That said, there may be a lot more manufacturing going on than official statistics suggest, since only a small fraction of African workers tend to be employed in the formal sector.
So despite myriad policy challenges — a fragmented patchwork of governments, fragile nations with artificial boundaries drawn by colonial empires of the past, scattered wars and violence — many African countries might be starting down the well-worn path of manufacturing-driven growth trodden by the developed world. Meanwhile, in South and Southeast Asia, poor countries like Vietnam and Bangladesh are adding factories even more rapidly. Although few expect this process to bring living standards up to the levels of Europe or Japan anytime soon, there’s hope that worldwide industrialization will at least alleviate extreme poverty.
Yet many people — including Nobel prize-winning economist Joseph Stiglitz and researchers at the Brookings Institution — believe that Africa and South Asia can’t follow the strategy that worked so well for Europe and East Asia. Automation, they claim, will soon render large-scale, labor-intensive manufacturing obsolete. They can point to the recent experience of developed countries, which have seen manufacturing work decline as a percent of total employment in recent years. When productivity improvements outpace demand for manufactured goods — that is, when automation grows faster than production — the share of workers employed in factories must decline.

Even China is not immune. A new paper by economists Osea Giuntella and Tianyi Wang finds that regions with industries more amenable to the use of industrial robots have seen employment and wages decline more in recent years. But China is already industrialized; the real danger is to the countries that are still poor. Stiglitz notes that in sub-Saharan Africa, manufacturing was lower as a percent of gross domestic product in 2000 than in 1977, and has risen only slightly since then. A 2015 paper by Harvard economist Dani Rodrik makes the case that premature deindustrialization is already hitting the developing world, declaring that “countries are running out of industrialization opportunities sooner and at much lower levels of income compared to the experience of early industrializers.”
Stiglitz and the Brookings researchers both suggest that African countries look elsewhere for growth. Their suggestions include tourism, agriculture, natural resource exports, and information technology services — basically, everything but manufacturing. Yet most of these suggestions offer little reason for enthusiasm. Agriculture tends to automate even faster than industry. Natural resource exports are linked to political dysfunction and trap a country at the low end of the value chain. Tourism is fine, but doesn’t lead to the kind of learning-driven productivity enhancements that manufacturing is known for.
One shouldn’t dismiss manufacturing so quickly. The longer-term decline in African manufacturing probably has more to do with the failure of mid-20th-century industrial policiesand central planning than with automation: It happened in the 1970s, 80s, and 90s — when industrial robots were still not widespread, and when China and other Asian countries were rapidly gaining manufacturing jobs. Now that countries like Ethiopia, Tanzania, Vietnam and Bangladesh are industrializing more naturally, through integration into global supply chains rather than government-driven efforts at import substitution, a repeat of 20th century deindustrialization seems unlikely.
And even if manufacturing doesn’t provide quite as much employment for poor countries as in the past, factories can still have an outsized impact on overall growth. One reason is an effect called local multipliers. When a city or region exports goods to other regions, the incoming revenue gets spent locally, creating extra demand and jobs nearby. Economist Enrico Moretti, for example, finds that “for each additional job in manufacturing in a given city, 1.6 jobs are created in the nontradable sector in the same city.” Thus, even if most of the new employment in Ethiopia, Tanzania, or Bangladesh comes from restaurants, shops, hair salons, and so on, factories are still very useful for generating those service jobs.
So poor countries shouldn’t give up on manufacturing. On the contrary, they should double down. They should lure foreign investment with quality infrastructure, improved education, and streamlined regulation, while nurturing domestic entrepreneurs with export assistance. Robots may one day shut the door to traditional industrialization, but there is every reason to think that for now, the opportunity is still there for the taking.

Drake Maths: Why he's the most streamed artist in the world on Spotify

Pay Gap in the UK: Is Something as Simple as Changing Job Descriptions a...