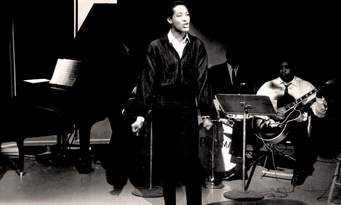 There are a couple of interesting, recent court cases that add to the mountain of litigation involving the music of Sam Cooke.
One case turns on the sometimes subtle differences between the “dramatic use” of copyrighted music and a mere live performance of that same music. The second case involves hundreds of thousands of dollars that Allen Klein, Sam’s manager, generously gave – as either a loan or a gift – to one of Sam’s friends and supporters, disc jockey Magnificent Montague.
The first case stems from a small-time stage production called “The Triumph and Tragedy of a Soul Stirrer – The Life of Sam.” The script for the production was written by Robert Douglas and the show was produced by Johnnie Washington.
In May and September of 2010, Washington wrote to Abkco’s New York attorney, Michael Kramer, saying he intended to launch a stage production about Cooke called “The Triumph and Tragedy of a Soul Stirrer: The Life of Sam.” The alleged purpose of Washington’s correspondence with Kramer was to ensure that the show did not infringe upon any of Abkco’s copyrights and to secure song rights from the various plaintiffs.
Kramer responded with an email on November 23, 2010, saying: “In connection with your proposed mounting stage production entitled, ‘Triumph & Tragedy of a Soul Stirrer: The Life of Sam,’ Abkco has not, and will not, grant any right for any song written in whole or in part by Sam Cooke the copyright of which is owned by Abkco to be used in any manner in the production.”
In subsequent emails dated November, 24, 2010, and December 16, 2010, and December 17, 2010, Washington and Douglas assured Mr. Kramer that they would not use any of Cooke’s musical compositions in the production.

Washington and Douglas then launched five performances of the production at the Music Hall Center for the Performing Arts in Detroit, Michigan. The show played there between December 20, 2010 and January 2, 2011. During each of these performances, a performer sang a medley of Sam Cooke songs before the main scenes of the dramatic production. The medley included songs written by Sam Cooke and owned by AMI and AMRI, including, “You Send Me,” “Another Saturday Night,” “Cupid,” “Wonderful World,” “Having a Party,” and “Bring it on Home to Me.” During the performance of those songs, the theater lights were on and the stage curtains were closed. After the performer completed his medley, the lights were dimmed, the curtains were opened, and the dramatic production began.
Washington and Douglas then scheduled a second series of performances to begin on February 26, 2011, but, in anticipation of litigation, canceled the shows a few weeks before the opening.
In February 2011, Abkco Music Inc., AMI Inc., AMRI Inc., and others sued Johnnie Washington, Robert Douglas and the Music Hall Center for the Performing Arts. AMI is a music publisher that owns or controls copyrights in musical compositions, including certain musical compositions written by Sam Cooke. Its parent company, AMRI, owns, manufactures and distributes recordings of Sam Cooke and others.
In their lawsuit, the plaintiffs alleged copyright infringement with regard to the songs used during the live musical performance that prefaced the stage play. The defendants argued that the songs were merely live performances – similar to a performance by a band in a nightclub – and were not actually part of the dramatic production. They argued that because of this, they did not infringe on any copyrights. (The parties agree that in order to use a musical composition in a dramatic performance, the party seeking to use the composition must obtain so-called “grand rights” or “dramatic rights” to the song. Past case law says that grand rights are required if: (1) a song is used to tell a story, or (2) a song is performed with dialogue, scenery, or costumes.

All parties agreed that Abkco and the other plaintiffs withheld any rights to use Cooke’s songs in the stage production. To support their argument that the songs were not used to tell a story and were not performed with dialogue, scenery, or costumes, Johnnie Washington sign an affidavit that said: “Prior to the ‘dramatic performance’ play run from December 30, 2010 thru January 2, 2011, we arranged a ‘non-dramatic medley’ tribute to Same Cooke’s music to be performed at 8:00 p.m. to 8:15 p.m., prior to the play production being opened at 8:15 p.m., as the patrons walked in and were being escorted by the ushers. We arranged for the stage curtains to be closed and the singer in a tuxedo performed a medley in front of the stage curtains… After he completed his presentation, I came from behind the curtains and addressed the audience.”
In court records, Washington stated: “The director, playwright and I, as the producer, did not use any songs of Abkco Music, Inc., Abkco Music & Records, Inc. … ‘in’ the dramatic performance.” Washington provided a copy of the script of the production, which did not include any spoken references to Cooke’s songs.
Abkco and the other plaintiffs claimed the medley was part of the production and not a separate and distinct performance. They submitted the affidavit of an individual who attended one of the shows. He alleged that actor Hassan Watkins, who played the character of Sam Cooke in the stage play, was also the singer who performed Cooke’s songs just prior to the first act.
Watkins allegedly was “wearing a classic suit similar to suits worn by Sam while he performed during the late 1950s and early 1960s” and “made sure to closely mimic the gestures and facial expressions that Sam Cooke fans had long associated with Sam. In addition, the suit Mr. Watkins wore while singing was one of the suits he wore as Sam’s character later in the production. Simply put, Mr. Watkins was clearly in character” while singing, the patron alleged.
The court found that there was sufficient evidence to show that Watkins, while singing, may have been dressed in costume and ‘acted’ the performance in that he was mimicking the expressions and gestures of Sam Cooke, and that this was all part of the overall stage production. Because of this finding, the court refused the defendants request to dismiss the lawsuit, allowing it to proceed toward trial. The case is still pending.
In an entirely separate case out of New York State Court, ABKCO Music and Records recently prevailed in their lawsuit against the legendary disc jockey, Nathaniel Montague, aka The Magnificent Montague, for the recovery of $353,590 that Abkco and its then-president, Allen Klein, reportedly loaned Montague and his partner, Rose Casalan.
ABKCO claimed that in 1999 it began loaning money to the two defendants so they could catalogue, photograph, evaluate, insure and advertise Montague’s extensive collection of African American art and memorabilia. Montague and Casalan allegedly agreed to repay the money on demand. In court papers, ABKCO said it had also made additional cash advances to the defendants to help Montague pursue various business opportunities and to support the two defendants’ “general living expenses.” According to ABKCO, the defendants agreed to repay these funds, too, on demand.
Montague and Casalan disputed most of those claims, arguing the so-called “loans” were actually gifts based on Allen Klein’s friendship with Montague and their mutual dedication to the music of Sam Cooke. As evidence of this friendship, Montague cited his autobiography, “Burn, Baby! Burn!” In that book, Montague penned what he called a “special acknowledgment to Montague’s matchless, dearest friend, Allen Klein of ABKCO Records, without whose support this book would have remained an unheard melody.” Montague also pointed to the deposition testimony of Jody Klein, Allen Klein’s son, who stated that his father and Montague had shared a “friendship and a passion for Sam Cooke.”
After the lawsuit was well underway, Abkco workers were cleaning out the office of the ailing Allen Klein, and stumbled across audio-tape correspondence from Casalan to Allen Klein. Lawyers for the company immediately went to court, saying they had “just recently uncovered physical evidence” that showed the cash transfers were loans, not gifts. The tape was allegedly made by Casalan and concluded, “Sincerely and with love, Montague and Rose.” On the tape, Casalan allegedly said to Allen Klein, “We really want you to know that we do understand clearly that you are advancing this financing to us … to ensure the maximum exposure for the sale of these collectors, these collectibles. It is also further understood that you will be reimbursed as purchases are made until the entire sum is paid.”
The defendants argued that even if the tape was genuine and provided an accurate description of the deal, it also was evidence that no money was due Abkco since, on the tape, Casalan implied that no repayment was due until the art collection was sold – and the collection still had not been sold at that point.
Kenneth Salinsky, the vice president of ABKCO, testified at his deposition that, at some point in 1997, he attended a meeting with Allen Klein, then president of ABKCO, Montague and Casalan. Montague and Casalan asked that Allen Klein, as the president of ABKCO, loan them money to help catalog and inventory their art collection. Klein agreed to loan them the money, Salinsky said, adding that “the only terms that were discussed during that meeting was that it was going to (be) a short-term loan . . . They needed a short period of time to put it together, get it catalogued, photographed and then try and sell it. And it would take somewhere around nine months or so.” No interest rate was discussed, he testified.
Jody Klein, then current president of ABKCO, said in his deposition that the company had made a series of loans to defendants, for a total of $ 353,590.29. The first, in 1999, was for $36,383. That was followed by loans for $68,217, and $60,581.42, and $77,157 … The loans continued with additional installments through March 2005, he testified.

August 2010, the case went to trial before Judge Emily Jane Goodman. Abkco presented three witnesses who testified that the advances were made as loans to help the defendants sell their collection of African American art and memorabilia. At trial, Abkco also introduced a July 1999 letter from the defendants’ own accountant, David Cooper, who wrote to Salinsky and said that “it became apparent that [defendants] may have some deductible business expenses being paid for via the loan that has been set up through your office.”
The defendants presented no witnesses at trial, and instead asked for dismissal, arguing that Abkco had failed to prove its case. Goodman granted the defendants’ motion to dismiss the complaint. Abkco appealed, and in 2011, the New York Supreme Court unanimously reversed Goodman’s decision awarded a $325,000 judgment in favor of Abkco.
The Supreme Court noted that during the course of the court proceedings, the defendants themselves had acknowledged that the “advances” they received from Abkco had to be repaid at some point. In doing so, the court said, they had admitted the advances were loans and not gifts.

EZjet’s boss applies for bail, after trial postponed to October