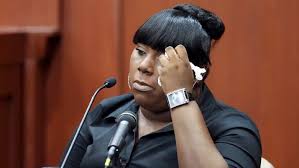 The writer: Tracy Fuller
Date first published: 29 January 2019
Like many Americans, Taylor Jones closely followed the trial of George Zimmerman in the 2012 shooting death of 17-year-old Trayvon Martin as it unfolded on television.
But as a linguist, Jones was perhaps watching a little more intently than most. He is a doctoral student of linguistics at the University of Pennsylvania, specializing in African-American English, a set of dialects spoken primarily by black people in North America.

Jones shared his findings with As it Happens host Carol Off. Here is part of their conversation.
Let’s talk about your study with Philadelphia court reporters. What did you learn about how they interpret the language of African-Americans?
We had 27 court reporters who currently work in Philadelphia. And we gave them 83 sentences spoken by nine different speakers from North Philadelphia and West Philadelphia.
The sentences were regular, mundane everyday speech. But they did have grammatical features of African-American spoken English. And they were spoken by people who have African-American Philadelphia accents.
What we found is that they were not transcribed at the level of accuracy that we expect from court reporters — 95 per cent accuracy.
That seemed, in part, related to familiarity with the dialect and familiarity with the accents.
What were some examples of phrases that were misinterpreted?
One example that really stood out to me was “He don’t be in this neighbourhood.” That has very specific meaning: The “be” marks habitual action. So, “He don’t be in this neighbourhood” means “He’s not usually in this neighbourhood.”
That was transcribed multiple times by different court reporters as “He’ll be in this neighbourhood.” So it changes the meaning completely.
I noticed in the phrases from the test there are a number that use double-negatives, like: “Nobody never say nothing” — which means “Nobody ever says anything.” How often is that the case?
People did generally very well with just double-negatives, but not very well with double-negatives when there was any other feature of African-American English.
Negation combined with what’s called negative-auxiliary inversion led to a lot of confusion, like: “Don’t nobody never say nothin’ to them.” That would be interpreted as a command, rather than a statement by a number of the court reporters.
Sometimes it would be transcribed correctly, but the paraphrase would be something like: “Do not tell them anything” —whereas the meaning is “Nobody ever tells them anything.”
Isn’t there a view that this is just bad grammar, and that it shouldn’t be taken seriously? Is that part of the issue?
I believe that’s a huge part of the issue.
That view is something that linguists have been fighting for decades.
If you look at any of the research in linguistics in the past 50-plus years, it’s very, very clear and unequivocal that African-American English is a consistent, rule-governed, systematic dialect.
However, very, very often, the general public will hold beliefs or language attitudes about African-American English — that it’s bad, that it’s broken, that it’s not systematic.
And it’s in part our job as linguists to challenge and to correct those views. This is something that is pervasive, and it’s also wrong.
I understand you also found that black stenographers would mis-transcribe as well. So what are the consequences for people?
The consequences can be really wide-reaching. What the court reporter transcribes becomes the official fact of what was said, regardless of what comes out of your mouth in the courtroom.
And that can then be used in a number of places throughout somebody’s journey through the judicial system — for instance, depositions before trial as we heard; but also appeals are often based almost exclusively on procedure and on the transcripts.
So this is something that can really affect somebody at every stage of the process as they move through the judicial system.