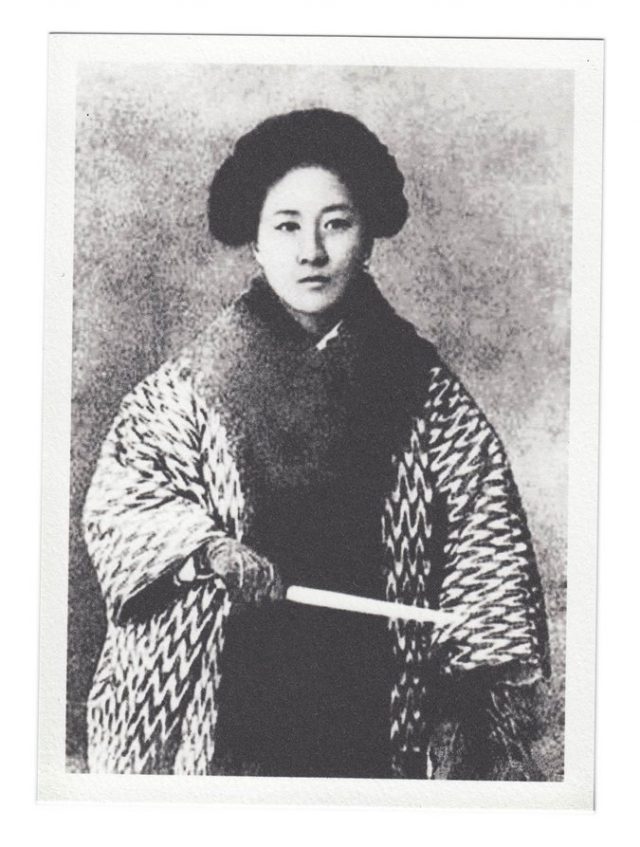 C. 1875-1907
Qiu Jin
A feminist poet and revolutionary who became
a martyr known as China’s ‘Joan of Arc.’
BY AMY QIN

With her passion for wine, swords and bomb making, Qiu Jin was unlike most women born in late 19th-century China. As a girl, she wrote poetry and studied Chinese martial heroines like Hua Mulan (yes, that Mulan) fantasizing about one day seeing her own name in the history books.

But her ambitions ran up against China’s deeply rooted patriarchal society, which held that a woman’s place remained in the home. Undeterred, Qiu rose to become an early and fierce advocate for the liberation of Chinese women, defying prevailing Confucian gender and class norms by unbinding her feet, cross-dressing and leaving her young family to pursue an education abroad.

Her legacy as one of China’s pioneering feminists and revolutionaries was cemented on July 15, 1907, when she was beheaded at 31 by imperial army forces who charged her with conspiring to overthrow the Manchu-led Qing government. It was her final act of resistance, and it would later earn her a place in the pantheon of China’s revolutionary martyrs.

To this day, she is often referred to as “China’s Joan of Arc.”

“Qiu Jin lived at a time when women in China were not permitted to venture out of their homes, let alone participate in public affairs,” said Zhang Lifan, a writer and historian in Beijing. “So Qiu Jin not only participated in politics, her actions alone were a rebellion.”

Throughout her life, Qiu wrote often of what she saw as China’s stifling gender roles, as seen in this passage from a 1903 poem.

At the time of the poem’s writing, China was an empire in distress. The Qing government was on its last legs, heaving under the weight of internal bureaucratic decay and external pressure from foreign powers.

With the uncertainty of the period came opportunities for educated Chinese women like Qiu. As a result, Qiu soon found herself at the forefront of an emerging wave of new feminists who believed that women’s rights and political revolution naturally went hand in hand.

But scholars say the enduring strength of Qiu’s legacy lies not only in her leadership, but also — and perhaps more important — in her willingness to ultimately sacrifice her life for the cause.

“She argued that it wasn’t enough for women to just sit around and ask for equality,” said Hu Ying, a professor of Chinese literature at University of California, Irvine. “She believed you had to be willing to put your life on the line. And the fact that she really did put her life on the line is what made her words stick.”

As is often the case with any historical martyr, it is difficult to disentangle the facts of Qiu’s life from later myth making.

Qiu Guijin (pronounced Cho GWAY-Jeen) was born into a respected, albeit declining, gentry family in the southern port city of Xiamen on Nov. 8, 1875 (some scholars say 1877). Her father, Qiu Shounan, was a government official. Her mother, surnamed Shan, also came from a distinguished literati-official family.

With her older brother and younger sister, Qiu grew up in Xiamen and her family’s ancestral home of Shaoxing in China’s eastern Zhejiang Province.

By all accounts, she had a comfortable childhood. But she was forced to bind her feet, learn needlework and — worst of all, in Qiu’s eyes — submit to an arranged marriage.

The man Qiu’s father chose for her was Wang Tingjun, the son of a wealthy merchant in Hunan Province. In 1903, seven years after marrying, the young couple moved with their two children from Hunan to Beijing.

For Qiu, life in the imperial capital was decidedly less dull. She struck up friendships with like-minded women and began to take an interest in China’s political affairs. She unbound her feet, drank copious amounts of wine and began experimenting with cross-dressing and swordplay.

Still, the frustrations of her marriage took a deep toll on her psyche. Her husband, she felt, was uncultivated and had no interest in poetry or learning.

So in the summer of 1904, Qiu, then 28, acted on a bold decision: She left her husband and two children, sold her jewelry and sailed for Japan. (For that reason, scholars sometimes call her “China’s Nora,” after the character in Henrik Ibsen’s 1879 play “A Doll’s House”.)

She summed up her life in a 1904 poem called “Regrets: Lines Written En Route to Japan”:

In Tokyo, Qiu enrolled at Shimoda Utako’s Women’s Practical School, shortening her name to Qiu Jin. But she focused most of her energy outside the classroom, connecting with other reform-minded Chinese students similarly keen on fomenting revolution back home. She joined influential anti-Manchu secret societies, including the Restoration Society and Sun Yat-sen’s Revolutionary Alliance.

She came back to China in 1906 with a militant determination to advance women’s causes and topple the Qing government. She started the short-lived “Chinese Women’s Journal,” which, unlike most feminist magazines at the time, used vernacular language to appeal to a broader audience on topics like the cruelty of foot-binding and arranged marriages. She also learned how to make bombs.

By 1907, Qiu was running the Datong School — a front for a group that recruited and trained young revolutionaries — in Shaoxing when she learned that Xu Xilin, who was her friend and the school’s founder, had been executed for assassinating his Manchu superior.

After Xu’s death, friends warned Qiu that Qing troops were coming to Shaoxing to find the woman thought to be his co-conspirator. But Qiu refused to run away. In a scene that has since been memorialized and embellished in a multitude of forms, Qiu attempted to fight back but was quickly captured, tortured and beheaded.

Over the years, critics have accused her of being naïve in her belief — widely shared at the time — that overthrowing the Qing could resolve China’s social and political ills. Others said her death was unnecessary since she had ample time to escape from the advancing soldiers.

Perhaps her most notable critic was Lu Xun, one of China’s greatest 20th-century writers, who believed Qiu’s reckless behavior in Shaoxing was linked to the enormous adulation she received during her time in Japan. She was “clapped to death,” he told a friend.

More than a century after her death, many Chinese still visit her tomb beside West Lake in Hangzhou to pay their respects to the woman now embedded in the national consciousness as a bold feminist heroine.

Some can also still recite the famous words she wrote just before her death: “Autumn wind, autumn rain, fill one’s heart with melancholy.”

The line was a play on her surname “Qiu” which means “autumn” in Chinese.

Much of Hip-Hop Lyrics Describe Sceptism, Emptiness, Hedonism and Materialism