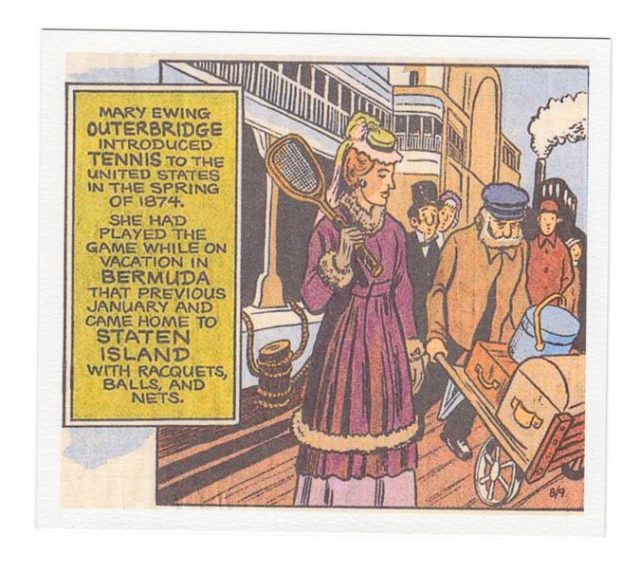 Established what may have been
America’s first tennis court in the 1870s.

Mary Ewing Outerbridge didn’t have an easy time bringing tennis to America in 1874.

First she had to get past customs agents. And they were suspicious. What was this large net? Clearly it wasn’t for fishing, they said. And what were these stringed things with long handles?

Outerbridge explained that the items were for a game called Sphairistiké, which is Greek for “playing at ball.” She had seen British Army officers engaged in a match during a vacation in Bermuda and was entranced by the graceful strokes and fluid motions. She told the agents she was taking the gear back home, to Staten Island, to teach her friends and family to play.

The agents weren’t convinced and confiscated the items. But her older brother, A. Emilius Outerbridge, happened to be a shipping executive. After he pulled a few strings, the equipment was released.

And so that spring, Outerbridge set up one of the first courts in the United States at the Staten Island Cricket and Baseball Club in St. George. The name Sphairistiké didn’t stick, but the game did, even though it was very different from modern-day tennis.

For starters, the court was shaped like an hourglass, 30 feet wide at the base and 24 feet wide at the net, rather than the 27-foot-wide rectangle that it is today, according to “Tennis: Its History, People and Events,” by Will Grimsley.

The game itself was slow and relaxed with lots of chatting between shots. This worked just fine for men in stiff white pants and women in large ornate hats and ankle-length skirts with several layers of petticoats.

Soon tennis courts began popping up in Newport, R.I., Plainfield, N.J., Philadelphia and New Orleans. But there were discrepancies in how the game was played. In some cities, the net was three feet high; in others, it was four. Some rackets weighed 13 ounces, while others were a pound or more. Even the balls varied in size.

This was problematic when players showed up for the first national tournament, hosted by Outerbridge in 1880. People were astonished to see how everyone else had been playing, and some refused to participate. The inconsistencies led to the creation of the United States National Lawn Tennis Association the following year. The words lawn and national have since been dropped from the name.

Mary Ewing Outerbridge was born on Feb. 16, 1852, in Philadelphia, the seventh of 10 children of Alexander Ewing Outerbridge and Laura C. Harvey, both from wealthy Bermuda families. It is unclear when they moved to Staten Island, but their influence on New York City did not go unnoticed.

Outerbridge’s brother Eugenius Harvey Outerbridge was the first chairman of New York’s Port Authority, and the Outerbridge Crossing, a bridge that links Staten Island with Perth Amboy, N.J., was named after him. Biographical records on her life are scant, but there is no evidence that Outerbridge married or had a child.

Before Outerbridge spotted the game in Bermuda, tennis in one form or another had been played for hundreds of years or more in Europe and, perhaps earlier, in the Middle East, said Warren F. Kimball, a historian who wrote about the game’s origins in “The United States Tennis Association: Raising the Game.” It was most commonly played indoors. Maj. Walter Clopton Wingfield, a British Army officer, was credited with adapting it for outdoor play.

Major Wingfield patented the game and sold it as a set with rubber balls, a net, poles and court markers. Sales were brisk. In fact, the game grew so popular so quickly in the United States that historians still debate who introduced tennis to America first. Was it Outerbridge? Was it James Dwight, who brought it back from a trip to England and set up a court on his uncle’s lawn in Nahant, Mass.? Or was it one of several other early players in the United States?

The New York Times even weighed in on the debate. One article, in 1931, reported that the matter was settled after the American tennis player Malcolm D. Whitman procured a copy of the official passenger list on the S.S. Canima sailing from Bermuda to New York. It showed that Outerbridge returned to New York in February 1874, before any court existed in the United States.

But when did she actually set up her court? It’s hard to say. According to Kimball, one thing is certain: “Lawn tennis arrived in the United States in the mid-1870s separately and independently in at least six different places.”

There is no doubt, however, that Outerbridge was a pioneer of the game. And her involvement may have inspired women to demand that they be included in the sport, even when men tried to discourage them, as Kimball pointed out.

Men would say, “This is bad for women. Women shouldn’t run around and perspire. You certainly don’t want it to interfere with childbirth,” Kimball said. “But women loved tennis.”

The first United States championship game for women was held in 1887. But Outerbridge did not live to see it. She died of Bright’s disease, or inflammation of the kidneys, on May 3, 1886. She was 34.

How to make the most out of 2019 Online Retail Opportunities