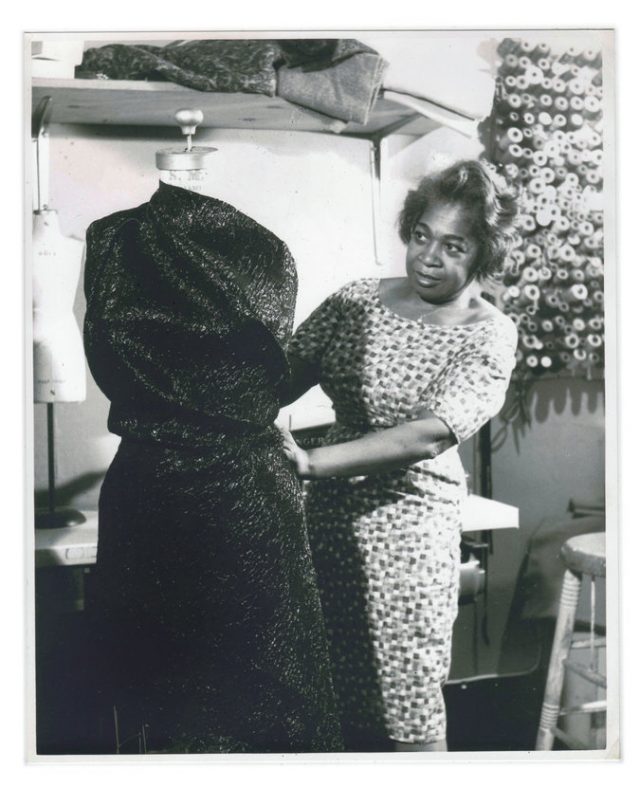 A fashion designer who outfitted
the glittery stars of screen and stage.

More than a half century before a “curvy” model made the cover of the Sports Illustrated swimsuit issue, and before hashtags like #allbodiesaregoodbodies, there was a designer who knew that it was the job of clothes to fit the woman, not vice versa.

Zelda Wynn Valdes was a designer to the stars who could fit a dress to a body of any size — even if she had to do so just by looking at the client. “I only fit her once in 12 years,” Valdes told The New York Times in 1994 of her long-time client Ella Fitzgerald, “I had to do everything by imagination for her.” Valdes would simply look at Fitzgerald in the latest paper, noting any changes in her full-figured body, and would design the elaborate gowns — with beads and appliques — that she knew Fitzgerald loved.

Seamstresses were deemed problem solvers, while couturiers were lauded as genius innovators. It wouldn’t be easy for Valdes to break the racial barrier into the world of haute couture custom design.

Valdes’s earliest impulses to design clothing likely came not from wanting to dismantle Jim Crow but from a desire to create. She was born on June 18, 1905, into a working-class family in Chambersburg, Pa. Her fondness for sewing and pattern-making developed alongside her training as a classical pianist with the Catholic Conservatory of Music. By the time she was 13, she was a skilled musician who was wowing her family members with the dresses she made for them.

After graduating from high school in the early 1920s, she moved to White Plains, where she got a job at a posh boutique. The position was as a stockroom worker, but Valdes had a plan: She would accept the job in the back, tucked away from white clients, but would eventually shine in the front of the store as a seamstress. And she did. In recalling the job for The New York Times in 1994, she said: “It wasn’t a pleasant time. But the idea was to see what I could do.”

She quickly gained a reputation as a seamstress with a keen, artistic eye and technical precision and opened her own boutique. It was there that she defined her signature style: a mix of the effortless glamour of her grandmother, whose dresses had all been handmade, and the luxury of the boutique’s jetsetter clientele.

Valdes worked with only the finest textiles, and her garments were unabashedly feminine. She turned silk organza, crepe, hammered satin and Italian knit jersey into slinky, curve-hugging evening gowns, with intricate hand beading and sequins. She also made elegant bridal gowns and dresses that could shift from work days to cocktail hours. These garments were the highlights of fashion shows Valdes organized for various black social clubs and fund-raisers in the region.

The fashion shows helped Valdes find a loyal clientele of black women in New York City, where she opened her boutique, Zelda Wynn, on Broadway and West 158th Street, in 1948. It became a haven for black women who had felt the sting of racism while shopping at white-owned stores. She mostly designed for socialites and the wives of famous black men, such as Edna Mae Robinson, the wife of the boxer Sugar Ray Robinson. She even designed and made all of the bridal attire for the crooner couple Nat King Coleand Maria Ellington.

After the Cole wedding, the glittery stars of screen and stage began seeking her out. She designed clothing for Marian Anderson, Dorothy Dandridge, Josephine Baker, Eartha Kitt, Ruby Dee, Diahann Carroll, Mae West and Marlene Dietrich. Years later, Valdes would tell The Times: “I have a God-given talent for making people beautiful.”

Valdes was also instrumental in forming the National Association of Fashion and Accessories Designers in 1949 to elevate other black female designers while helping them build networks, address discrimination in the workplace and promote racial diversity in the fashion industry.

In the late 1950s, she moved her operation to Midtown, where she opened Chez Zelda. She helmed a staff of nine dressmakers at the new shop, which was adjacent to Carnegie Hall. The location created even more exclusivity around her brand: Valdes was now a queen of the custom market. Her clients were paying nearly $1,000 to have a Zelda Wynn couture gown.

In the early 1960s Valdes forged a relationship with Hugh Hefner and his chain of nightclubs and resorts known as the Playboy Club. Hefner was looking for an outfit for the waitresses, and some have said that he approached Valdes. But there has since been some debate over who came up with the costume’s design.

Journalists writing immediately after Valdes’s death overstated her involvement, even going so far as to say she “invented” the iconic outfit. In recent years, some cultural critics have built upon those stories, further miscrediting Valdes as being the sole creator of the garment.

What’s more plausible is that Valdes and her team were among those commissioned to manufacture some of the garments. Many people were said to have had a hand in the design, and Nancy Deihl wrote in “The Hidden History of American Fashion” (2018) that Valdes and her dressmakers “fabricated at least thirty-five costumes.”

What we do know is that by the time Hefner met Valdes, she was just as much of a boss as he was, with the black press touting her as “internationally famous.” Valdes parlayed her relationship with the mogul into an opportunity to expand her brand, hosting dazzling fashion shows before the Playboy Club’s integrated crowd, billed as “Zelda at the Playboy.”

Valdes went on to have a storied career. She later taught fashion design classes to Harlem youth and co-founded the Harlem Youth Orchestra with Lester Wilson in the mid-1960s.

In 1970, she began designing costumes and touring with the Dance Theater of Harlem, a position she would hold for more than two decades. One of Valdes’s innovations was dyeing each dancer’s tights to match their skin tone. Until then, black dancers had spent their careers wearing pink tights that were supposed to mimic the flesh of white dancers, underscoring the racial uniformity of classical ballet.

And now — thanks in part to Valdes’s pioneering efforts — dancers of color can buy point shoes in their own skin tone.

She was a couturier.