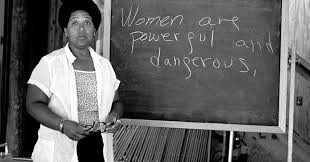 Chisolm broke major barriers when she became the first black congresswoman in 1968. She continued on her political track when she ran for president four years later, making her the first major party black candidate to run.

Claudette Colvin (1939-present)
Several months before Rosa Parks’ refusal to give up her seat on a bus, Colvin was the first person arrested for resisting bus segregation in Montgomery, Alabama, at the age of 15. She also served as one of four plaintiffs in the case of Browder v. Gayle, which ruled that Montgomery’s segregated bus system was unconstitutional.
Septima Poinsette Clark (1898–1987)
Clark was an educator and civil rights activist who established citizenship schools that helped many African Americans register to vote. Regarded as a pioneer in grassroots citizenship education, she was active with the NAACP in getting more black teachers hired in the South.
Mary Church Terrell (1863–1954)
This women’s suffrage activist and journalist was the first president of the National Association of Colored Women and a charter member of the NAACP. She was also one of the first African-American women to be awarded a college degree.
Angela Davis (1944-present)
Davis is a revolutionary American educator. The former Black Panther has fought for race, class and gender equality over the years. Davis authored one of the of the most distinguished books in the field of women’s studies called Women, Race & Class. She’s also an advocate of prison reform
Ida B. Wells-Barnett (1862-1931)
Wells helped bring international attention to the horrors of lynching in the South with her investigative journalism. She was also elected as the Secretary of the Colored Press Association in 1889.
Kathleen Cleaver (1945-present)
Kathleen Cleaver one of the central figures in Black Panther history. She was the first communications secretary for the organization and is currently a law professor at Emory University. She also helped found the Human Rights Research Fund.
Dr. Dorothy Height (1912-2010)
Dr.Height was regarded by President Barack Obama as “the godmother of the Civil Rights Movement.” She served as the president of the National Council of Negro Women for over two decades and was instrumental in the integration of all YWCA centers in 1946.
Phillis Wheatley (1753-1784)
Wheatley was a former slave who was kidnapped from West Africa and brought to America. She was bought by a Boston family and became their personal servant. With the aid of the family, she learned to read and eventually became one of the first women to publish a book of poetry in 1773.
Audre Lorde (1934-1992)
This Caribbean-American writer and activist was a self-described “black, lesbian, mother, warrior and poet.” She empowered her readers with her moving poetry often tackling the injustices of racism, sexism and homophobia. She’s known for her poetry and memoirs such as, From a Land Where Other People Live, The Black Unicorn and A Burst of Light.
Flo Kennedy (1916-2000)
Kennedy was a founding member of the National Organization of Women and one of the first black female lawyers to graduate from Columbia Law School. She helped found the Feminist Party in 1971, which later nominated Representative Shirley Chisholm for president.
Marsha P. Johnson (1945-1992)
Johnson was an outspoken and fearless trans woman who played a vital part in the fight for civil rights for the LGBT community in New York. She was known as the patron at Stonewall Inn who initiated resistance on the night the police raided the bar.
For more information follow this link:
https://m.huffingtonpost.co.uk/entry/28-queens-of-black-history-who-deserve-much-more-glory_us_56b25c02e4b01d80b244d968?ec_carp=8143950374546997765#click=https://t.co/Y55ReWRaGm

High Spending on Arms in Africa