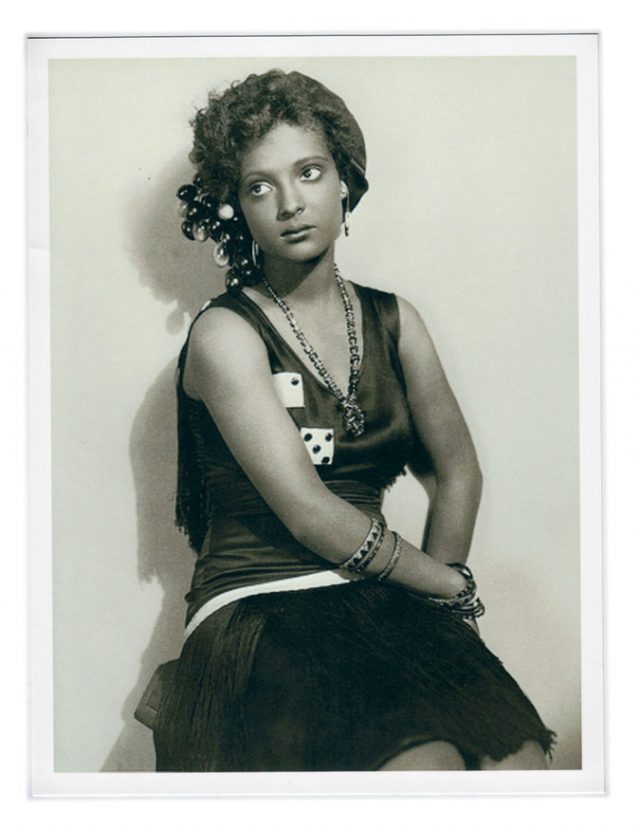 An actress who defied the barrier
of race to find stardom in Europe.

About 20 minutes into “Hallelujah,” Hollywood’s first all-sound feature with an all-black cast, Nina Mae McKinney appeared on screen as Chick, a singer and dancer, in a sexy flapper dress.

She had flashing eyes, an armful of jangly bracelets, and no qualms about cheating a handsome young cotton farmer out of the money he had just gotten for his family’s crop.

Chick showed off her talents doing the Swanee Shuffle (“Just imitate the way a waiter/Walks with a plate of grub”); flirted shamelessly while close-dancing with the farmer (Daniel L. Haynes); and sweet-talked him into a fateful dice game with a con man.

“Hallelujah” was a musical drama from an important white director, King Vidor, and McKinney would soon be called the first black movie star. After the film’s release in 1929, The Daily News of New York hailed her as “an honest-to-goodness screen star — the first colored girl to attain this distinction.” Some referred to her as the black Clara Bow. When African-American newspaper headlines called her only Nina Mae, everyone knew whom they meant.

MGM gave her a five-year contract, then seemed to realize there were no leading movie roles for black women in the 1930s.

Lamenting what he feared would be her fate, Richard Watts of The New York Herald Tribune wrote that her “exile from the cinema is the result entirely of narrow and intolerant racial matters.” It was 1934.

She moved to Europe and began a successful musical and theatrical career there, punctuated by American comeback attempts. She left performing in the early 1950s, although as late as 1954 Hue magazine reported that she was “preparing a return to show business in a new act.”

McKinney was 54 when she died at Metropolitan Hospital in Manhattan on May 3, 1967. The cause was a heart attack, according to a short obituary in The New Amsterdam News. Her funeral was at the Little Church Around the Corner, whose ties to the theater world go back to the 19th century.

“She could act, sing, dance and wisecrack with the best of them, but she came along too early and there was no place for her,” Fayard Nicholas of the dancing team the Nicholas Brothers is quoted as saying in “Nina Mae McKinney: The Black Garbo,” Stephen Bourne’s 2011 biography. The book quotes the film historian Donald Bogle as calling her “energy incarnate and delirious fun to watch.”

Nannie Mayme McKinney was born to Hal and Georgia (Crawford) McKinney on June 12, 1912, in Lancaster, S.C., a small town near the North Carolina border. When she was 12, her parents moved to New York City looking for new job opportunities, and her father found work with the postal service. She stayed behind for four years, living with a great-aunt who worked as a housekeeper and cook, running errands for a white family and appearing in plays at Lancaster Industrial, an all-black school. Then she moved to New York herself.

That first year, she was on Broadway, in the musical revue “Blackbirds of 1928.” It was there Vidor saw her in the chorus line and offered her the “Hallelujah” role.

McKinney appeared in more than two dozen films and shorts over two decades, but about half of those were uncredited parts — often as a maid (the kind of role she had publicly vowed never to play) or an unnamed entertainer in a nightclub scene. One of her most acclaimed performances was as an undercover agent posing as a cabaret singer in “Gang Smashers” (1938), the best of her three “race movies” (low-budget features made for black audiences). Her last credited screen appearance came in “Pinky” (1949), Elia Kazan’s drama starring Jeanne Crain as a fair-skinned black woman passing for white. McKinney’s one scene, as a fiercely jealous girlfriend, was powerful: Crain is “nothing but a low-down colored girl trying to steal my man,” she tells police officers. But it didn’t revive her Hollywood career.

Leaving the United States was probably the best move McKinney ever made, and she did it early. A three-month European publicity tour for “Hallelujah,” starting in 1930, expanded to include club dates in Paris, London, Berlin, Monte Carlo and beyond. She returned to Paris in 1932, possibly inspired by Josephine Baker, the African-American entertainer who had recently become a Folies Bergère star.

While in England, McKinney starred opposite Paul Robeson in the film “Sanders of the River” (1935), playing an African chief’s wife — with thin-plucked Hollywood eyebrows. She also had the distinction of being the first African-American entertainer on British television, as part of the BBC’s experimental broadcasts in the 1930s.

She often topped the bill at British clubs. Reviews mentioned some frequent numbers: “It Don’t Mean a Thing,” “Stormy Weather,” “Lazybones” and “Shuffle Off to Buffalo.” Almost two decades later, her last recorded public performance was less successful: as the prostitute Sadie Thompson in a short-lived staging of “Rain” at the Apollo Theater in 1951.

Reports differ on whether McKinney was ever legally married to Jimmy Monroe, a jazz musician who later became Billie Holiday’s husband. McKinney and Monroe toured nationally with his band in the mid-30s, and a 1994 Daily News tribute shortly after Monroe’s death mentioned her as an ex-wife. Newspapers reported other marriages — to Robert Montgomery (nicknamed Charleston and not the white film star of that name) in 1939; to Frank McKay, a civil engineer, in 1949; and others — but they were unconfirmed. McKinney left no known survivors. In 1978, she was inducted into the Black Filmmakers Hall of Fame.

Her first film director had recognized her gift. “It took no great effort to bring it out,” Vidor wrote in “A Tree Is a Tree,” his 1953 memoir. “She just had it. Whatever you wanted, whatever you visualized, she could do it.”