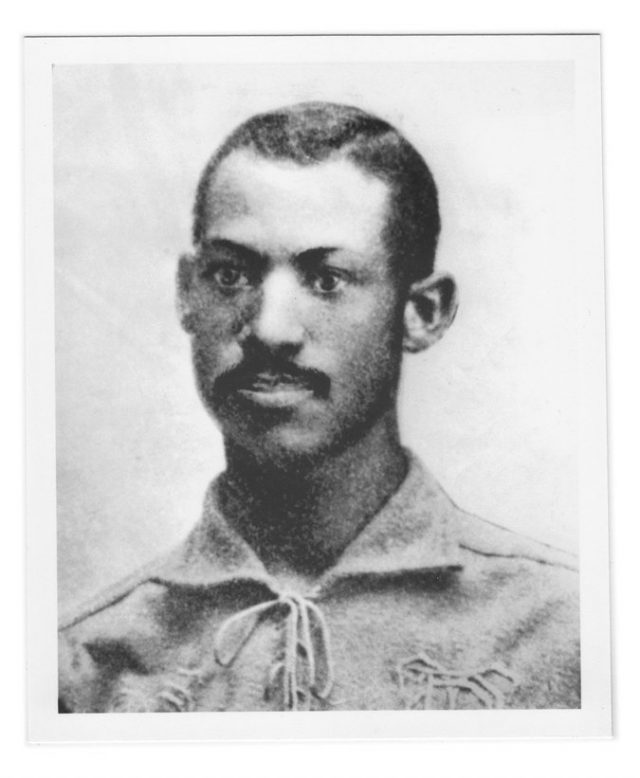 The first black baseball player in the big
leagues, even before Jackie Robinson.

When Jackie Robinson joined the Brooklyn Dodgers in 1947, becoming the first African-American player in modern major league baseball, he was not only a trailblazer in the sports world, but an inspiring figure in the modern civil rights movement.

But Robinson was not the first ballplayer in the long history of big league baseball known to be an African-American. That distinction belongs to Moses Fleetwood Walker.

Walker made his debut in the American Association, one of the two major leagues of his time, on May 1, 1884, as a catcher for the Toledo Blue Stockings in their game in Louisville against the Eclipse squad. When Robinson signed his major league contract, The New York Times mentioned Walker briefly, but he had played in the majors for only one season and had been largely been forgotten.

Most of Walker’s teammates on the Blue Stockings appear to have accepted him, but Tony Mullane, one of the 19th century’s leading pitchers, proved a notable exception.

“He was the best catcher I ever worked with, but I disliked a Negro and I used to pitch anything I wanted without looking at his signals,” Mullane was quoted as saying in a 1919 interview with the African-American newspaper The New York Age.

Walker played in 42 games in 1884, batted a respectable .263 and had a strong throwing arm. In July, he had been joined by his brother Weldy, who played in a few games as an outfielder.

But the Walker brothers’ major league careers were over by the fall of 1884, and Moses drifted through the minors after that, never to return to baseball’s highest rung.

In the 1890s, about a quarter-century after the Confederacy’s defeat in the Civil War, the baseball club owners, both in the majors and the minors, succumbed to the tenor of a time when America’s racial divide was hardening. Baseball became a whites-only affair.

The minors remained all white until 1946, when Jackie Robinson played for the Brooklyn Dodgers’ Montreal Royals farm team.

“Walker and Robinson had some common experiences, but while Robinson played at a time when the historical tide was carrying society toward integration, Walker stood as a nearly solitary figure attempting to play ball as an ebb tide swept away popular support for racial equality,” David W. Zang wrote in “Fleet Walker’s Divided Heart: The Life of Baseball’s First Black Major Leaguer” (1995).

Moses Fleetwood Walker was born on Oct. 7, 1857 (according to the year listed on his gravestone, although some accounts say he was born in 1856), in Mount Pleasant, Ohio, a way station for the Underground Railroad smuggling runaway slaves to Canada.

The circumstances of his parents’ early lives are largely unknown. His father, Moses W., came to Ohio from Pennsylvania, but it is not clear whether he was born there or perhaps in Virginia or Canada. His mother, Caroline (O’Harra) Walker, was born in Ohio, according to census records. They moved their family to Steubenville, Ohio, when Walker was a youngster, and later to Oberlin. His father was a physician and also a Methodist minister. Walker’s parents were of mixed race, and the sports pages usually referred to him as “colored.”

Fleet, as he was known, was studying law at the University of Michigan when he turned pro in 1883 with Toledo, then in the minors’ Northwestern League. He had played baseball for Oberlin College and for Michigan, but left both without a degree to pursue his dream of becoming a major leaguer.

While Walker possessed a distinguished background uncommon for the rowdy professional baseball world of his time, trouble arrived even before he stepped onto a major league field.

When the Chicago White Stockings of the National League, the other circuit in the majors, arrived in Toledo for an August 1883 exhibition game, Cap Anson, Chicago’s player-manager and one of the biggest stars of the game, was furious upon learning he would be facing a black player. Anson grudgingly put his team on the field to avoid forfeiting a share of the gate receipts but said he would never again play against a black man. But Anson would play at first base in two 1908 games when his team faced the all-black Leland Giants, Howard Rosenberg wrote in “Cap Anson 4: Bigger Than Babe Ruth: Captain Anson of Chicago” (2006).

He fell upon difficult times.

In April of 1891, he was embroiled in an argument with several white men on a street in Syracuse, where he had played minor league ball. He pulled a pocketknife and fatally stabbed one of them. The questions of whether the episode stemmed from racial epithets, and whether Walker was hit in the head with a rock hurled by one of the men before or after he wielded his knife, were in dispute. An all-white jury found him not guilty, believing he acted in self-defense.

Walker was back in Ohio, working as a postal clerk on railroad trains, when he was arrested in 1898 for stealing mail. He was found guilty of federal theft charges and spent a year in prison.

Walker pursued business opportunities with his brother Weldy in his post-baseball life. Their ventures including an entertainment center in Ohio that offered motion pictures, plays, opera and vaudeville. He patented inventions that facilitated the loading of film reels by his projectionists at a time when the movie industry was in its infancy.

By the turn of the 20th century, if not earlier, Walker had become dispirited by bigotry.

In 1902, Moses and Weldy coedited a short-lived newspaper, The Equator, which focused on racial matters.

In 1908, Moses wrote a published tract titled “Our Home Colony: A Treatise on the Past, Present and Future of the Negro Race in America.” It was a scholarly work but essentially a cry of despair.

“The Negro should be taught he is an alien and always will be regarded as such in this Country, and that equal social, industrial and political rights can never be given them,” Walker wrote.

He added, “We believe that the Negro race can find superior advantages and better opportunities on the shores of old Africa, among people of their own race.”

Sentiment for having American blacks go back to Africa had previously been voiced on occasion by white segregationists and black nationalists alike. The American Colonization Society, founded in the early 19th century to send free American blacks to Africa, ultimately transported more than 13,000 black people to Liberia. But Moses Walker never emigrated to Africa or anywhere else and his biographer, Zang, wrote that “not a single passenger sailed for Liberia under the auspices of the Walker brothers.”

When Walker died of pneumonia on May 11, 1924, in Cleveland, he was working as a clerk in a billiard parlor. He outlived his first wife, Arabella, with whom he had three children, and his second wife, Ednah, both having been his classmates at Oberlin. He was about 66.

He was buried in an unmarked grave at Union Cemetery in Steubenville. Weldy, who died in 1937, was buried alongside him.

Researchers with the Society for American Baseball Research have found that a Brown University student named William Edward White played in one game at first base for the Providence Grays of the National League in 1879. White was the son of a Georgia slave owner and his mixed-race house servant. But he lived as a white man and was not regarded otherwise when he played in that major league game.

Moses Fleetwood Walker remains the first major leaguer recognized in his time as an African-American.

In recent decades, the Walker brothers have emerged from obscurity.

The minor league Toledo Mud Hens have posted a historical marker outside their ballpark chronicling Moses’s career, and the Ohio Legislature passed a measure in 2017 establishing an annual Moses Fleetwood Walker Day on his birthday.