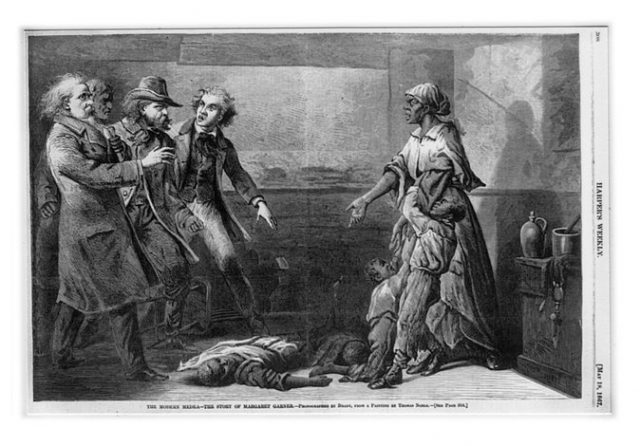 In one soul-chilling moment, she killed her own
daughter rather than return her to the horrors of
slavery. Her life inspired a Toni Morrison novel.

Margaret Garner, who was born as an enslaved girl, almost certainly did not plan to kill her child when she grew up and became an enslaved mother.

But she also couldn’t yet know that the physical, emotional and psychological violence of slavery, relentless and horrific, would one day conspire to force her maternal judgment in a moment already fraught with grave imperative.

In January 1856, when Garner, known as Peggy, was 22 and pregnant, she decided to flee the plantation where she was enslaved, in Boone County, Ky. She escaped with her husband and his parents, as well as their four children, and crossed over the frozen Ohio River to the safe house of Elijah Kite, Garner’s cousin, a free black man living in the free state of Ohio. Like hundreds of other enslaved black men, women and children, Garner and her family planned to use the Underground Railroad, which was then at its peak of operation, as the pathway to freedom.

Motherhood, across race, language, country and culture, is understood to be complicated and powerful: a tsunami of gut and joy and fear and heartache. Garner found herself in that fleeting, lightless instant of a mother’s incongruous love on a frigid night, when slave catchers surrounded her cousins’ home and when she made the decision, in one soul-chilling moment, to slit the throat of her 2-year-old daughter rather than return her to slavery.

Garner had already started on her three other children — she intended to kill them all, and then herself — when the federal marshals stormed the house to enforce the legal fact that she was not a mother or a wife, but the property of the man who owned her. She was immediately placed in prison.

Garner’s story has been preserved in history as both sensational and singular. It writ large a question that had been unanswered in the homes and hearts of whites in pre-Civil War America: Was slavery a fate worse than death? Garner, with knife in hand, gave an answer that was impossible to ignore.

Scholars have written books examining the series of events that led up to that fateful night. For more than 150 years, poets and painters have mythologized her in their work. Most notably, Garner’s case was the basis for Toni Morrison’s 1987 Pulitzer Prize-winning novel, “Beloved,” which was made into a movie starring Oprah Winfrey and later became the inspiration for the 2005 opera “Margaret Garner,” composed by Richard Danielpour, with a libretto by Morrison and starring the renowned mezzo-soprano Denyce Graves as Garner.

Only in these fictionalized versions of Garner are we given an idea of who she might have been as a black woman with an interior life, not just a runaway slave who committed a heinous crime.

She continues to be measured not by infamy, but by the shadows of her fortitude. As Morrison told NPR in 2010 while talking about the opera “Margaret Garner”: “The interest is not the fact of slavery, the interest is what happens internally, emotionally, psychologically, when you are in fact enslaved and what you do in order to transcend that circumstance. That really is what ‘Margaret Garner’ reveals.”

Born on June 4, 1833, Garner was the product of the rape of her black slave mother by a white slave master, characterized as a “mulatto” at the time.

Garner worked as a house slave for her owner, Archibald K. Gaines, and his family. She was gifted to Gaines’s wife, as was the case for many young light-skinned girls born into slavery. They were wet nurses and personal servants, faux friends and perverse doppelgängers. Historians speculate that at least two of Garner’s four children, also characterized as mulatto, were fathered by Gaines.

A story syndicated in The New York Times in 1856 about Garner and her family said “cruel treatment on the part of their master” was most likely what drove them to attempt an escape.

Garner’s case eventually went to trial. It lasted more than two weeks — one of the longest fugitive slave cases in history.

Newspaper coverage often described her physical appearance, and noted that she gave her testimony while holding her youngest child. The Cincinnati Gazette reported: “The babe, with its little hands, was continually fondling her face but she rarely noticed it, and her general expression was one of extreme sadness. Only once, when it put its hand to her mouth, we observed her smile upon it, and playfully bite its little fingers with her lips.”

The abolitionist and lawyer John Jolliffe asked that Garner be tried for murder, which would have set a civil rights precedent; instead Garner was indicted on charges of damage of property.

Garner, her children and her husband were all shipped to Louisiana and sold off to a brother of Gaines, their former slave master.

Garner never hurt any of her remaining children — one of whom drowned when the steamship transporting them to Louisiana crashed into another boat and threw her overboard.

Misinterpretion of African-American dialects in court