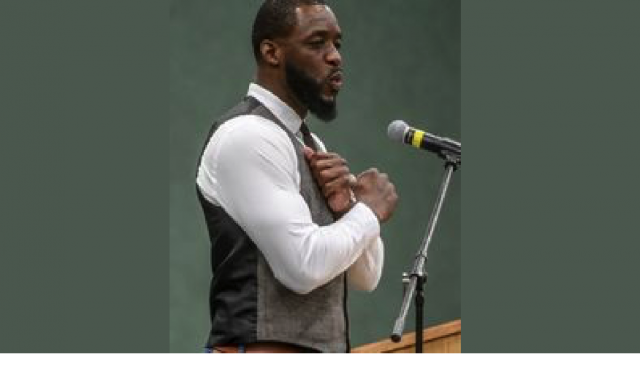 Some of the people closest to Cyrus Birch had misgivings when he auditioned to be a stuntman with Marvel Studios after quitting his job as a high school dropout-prevention coordinator.

“My mama told me I was crazy. My friends told me that I was crazy,” Birch said during his keynote address Monday night at the Birthday Celebration of the Rev. Martin Luther King Jr. at the Civic Center of Anderson.

They changed their minds after Birch was cast in the blockbuster “Black Panther” movie starring Anderson native Chadwick Boseman.

Birch told about 500 people at the event to watch for an upcoming sequel.

One purpose of the annual event is to provide financial support for the United Negro College Fund, which offers assistance to minority college students.

During his speech, Birch recalled living in “abject poverty” in Charleston with his mother, older sister and younger brother.

“I grew up in a very, very rough neighborhood,” said Birch, adding that he was affiliated with a gang.

But through determination and faith, Birch said, he managed to become the first person in his family to attend college. He is working on his second master’s degree and hopes to pursue a doctoral degree.

“Purpose is the reason that I’m standing here,” Birch said. “You guys have to find your purpose in life.”

Birch said cemeteries are “littered with people that have gone to the grave not accomplishing their purpose.”

They died with their purpose still inside of them,” he said. “That’s the greatest misfortune of humanity.”

Besides his movie career, Birch is president of a Roses in Concrete, a nonprofit organization that focuses on youth empowerment through leadership and career development, education, goal-setting and athletics. He said he has converted a three-bedroom apartment in Charleston into an academic and career center.

Birch said he is using his appearance in “Black Panther” as a platform “to be the man that needed when I was a child.”

“What I am most proud of is that I have a son and two daughters that can look at me with admiration and respect.”

Legacy History of the slave Trade in Bristol, UK