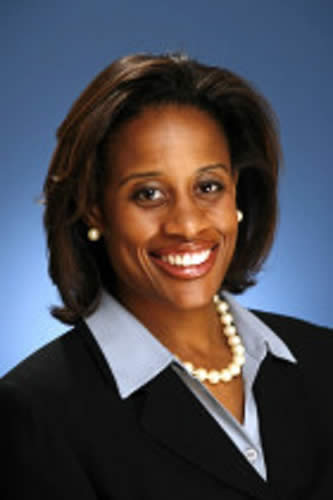 by Adedamola Agboola
(first published April 16, 2018)
Leslie Hale Latest Black Woman CEO of $ 1.2 Billion Company
Leslie Hale will join a very small club in August when she becomes the chief executive officer of RLJ Lodging Trust.
Hale has been serving as the company’s No. 2 since 2013, taking on the dual role of CFO and COO of the real estate investment firm that focuses on acquiring hospitality companies. Founded in 2001, RLJ Lodging Trust is publicly listed on the New York Stock Exchange and employs 99 persons. The company made $1.2 billion in revenues last year, putting it just beyond the benchmark of a Fortune 1000 company.
Hale will replace current CEO Ross Bierkan, when he retires and his employment agreement expires on Aug. 22, the release said. Hale will pick up where Bierkan leaves off with the integration of the company’s most recent acquisition of FelCor Lodging Trust. RLJ acquired the Texas-based REIT in September in an all-stock deal then valued at $1.02 billion.
“I am proud to have served with a team that has evolved from a start-up in the year 2000 to the third largest pure lodging REIT. We have a high-quality portfolio, a seasoned, experienced team, and the right strategic plan in place, which we have been successfully executing to unlock value. We are well on our way to achieving our key objectives this year, and with this backdrop, now is the right time for me to retire and celebrate the next generation of leadership at RLJ Lodging Trust,” said Bierkan in a statement. “The Company could not ask for a better choice than Leslie, who has an intimate knowledge of both our Company and the industry, and has demonstrated remarkable leadership qualities in her roles as COO and CFO. I look forward to supporting Leslie and the entire team to ensure a smooth transition.”
Leslie Hale will join a small and exclusive club, when she takes over from Ross Bierkan as CEO of RLJ Lodgings Trust come August. (Photo: Howard University)
Hale joined the firm’s predecessor, RLJ Development L.L.C. in 2005 as the director of Real Estate and Finance. She was promoted to vice president in 2006. A year later, she was promoted again—this time, to the role of chief financial officer and senior vice president and in 2013, was made an executive vice president. In 2016, she became RLJ Lodging Trust’s COO, with the added responsibility for management of the company’s operating platform in addition to overseeing all financial matters.
Prior to her tenure at RLJ, Hale held several roles within General Electric Capital Corp. (GE), including a vice president role in the Mergers and Acquisitions Group of GE’s Commercial Finance and associate director in the Strategic Capital Group of GE Real Estate. Before that, she was an investment banker at Goldman, Sachs & Co. She has served as a member of the board of directors of Macy’s Inc. since January 2015.
Hale earned a finance degree from Howard University in 1994, and a business degree from Harvard Business School in 2001. She also serves as a trustee of Howard University and lives with her family in the Washington, D.C. metropolitan area.
“I, along with the other members of the board, am pleased to name Leslie as the Company’s next CEO and welcome her nomination to the board,” said Robert L. Johnson, founder and chairman of RLJ Lodging Trust. in a statement. “We have an active and engaged board, and part of our ongoing responsibility is thoughtful succession planning. Through this process, the board determined that Leslie is singularly positioned and is the right person to take RLJ to the next stage. Leslie has done an incredible job as both COO and CFO. She knows our strategy well, and with her deep involvement in both the operational and financial sides of the business, she is uniquely prepared to succeed Ross and lead the Company forward. We are confident this leadership succession will be seamless and that Leslie will drive the Company’s continued success with an intense focus on maximizing value for our shareholders.”
Some Facts You Should Know:
There were 51 women CEOs on the Fortune 1000 list in 2014. Last year, the number increased to 54.
On the Fortune 500 list of companies, there are just 24 women CEOs as of March 2018—with Indra Nooyi of PepsiCo and Geisha Williams of energy company PG&E being the only women of color.
Since Kenneth Chenault stepped down from his position at American Express, there are now only just three male black CEOs on the Fortune 500 list.
RLJ Lodging is founded and chaired by Robert Johnson, the billionaire founder of BET. The real estate investment firm has nine board members including two black men and two women, including a woman of color, Glenda McNeal, who is president of enterprise strategic partnerships at American Express.

What makes an Ideal Landlord?