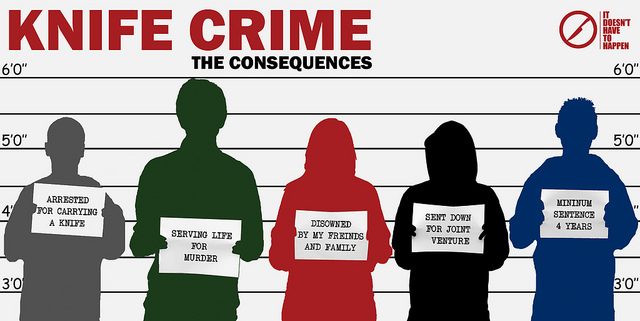 In 2005 Scotland was the most violent country in the developed world, from a United Nations report.
In 2013, it was reported that Glasgow has been ranked as the UK’s most violent area. Glasgow’s population is 88% white, 8% Asian.  So knife crime is not a black thing.
The UK Peace Index, from the Institute for Economics and Peace (IEP), said the city had the highest rates of homicides and violent crime.
The study, which looked at 10 areas, described it as “the least peaceful major urban centre”, with London and Belfast in second and third place.
However, researcher Steve Killelea said Glasgow had become much more peaceful over the past five years.
Areas were ranked according to the number of homicides and levels of violent and weapon crime, public disorder and numbers of police officers per 100,000 people.
In 2012 there were 2.7 homicides per 100,000 people in Glasgow. This compared to a 1.67 per 100,000 in London and a rate of 1.0 across the UK as a whole.
However, in 2007 Glasgow’s homicide rate was much higher at about 4.5
Based on telephone interviews with crime victims conducted between 1991 and 2000, it found that excluding murder, Scots were almost three times as likely to be assaulted as Americans and 30 times more likely than the Japanese.
In 2005, Strathclyde police set up a violence reduction unit (VRU) in an effort to address a problem that had made Glasgow, in particular, notorious.
The VRU, which is directly funded by the Scottish government and has an arms-length relationship with Police Scotland, was later rolled out across Scotland. It has adopted a public health approach to knife crime, in which the police work with those in the health, education and social work sectors to address the problem. The results so far have been dramatic.
Between April 2006 and April 2011, 40 children and teenagers were killed in homicides involving a knife in Scotland; between 2011 and 2016, that figure fell to just eight.
The decline has been most precipitous in Glasgow, which once had one of the highest murder rates in western Europe. Between 2006 and 2011, 15 children and teenagers were killed with knives in Scotland’s largest city; between April 2011 and April 2016, none were.
Of the 35 children and teenagers who have been killed with knives in Britain to Nov 2017, not one has been in Scotland.

Susan McVie, professor of quantitative criminology at the University of Edinburgh, points out that the police, working alone, have a limited capacity to prevent knife crime.
Fewer than 2% of stop and searches in Scotland result in the recovery of a knife, she says. “It’s hard to profile kids who carry weapons because a lot of those who carry a weapon aren’t the ones you would expect. They might be kids from middle-class backgrounds who feel frightened, isolated and threatened in social situations.”
Once violence was seen as a public health issue, the conversation changed: “We started to talk to offenders and ex-offenders and to challenge behaviours and the culture of violence,” says McVie.
It can be noted here that solutions for London may a bit more complex since the Glasgow situation involved white youths, and the London situation involves mostly black and ethnic youths.  It brings in the issues of race,  and inequalities from a family structure point of view.  However common sense tells us that the Glasgow solution needs to be included in any redressing of the London situation, and the whole wheel does not need to be re-invented.
Sourced by Alf Allen via guardian.com and bbc.co.uk

The Lion Sleeps Tonight – Songwriter did not get his due.