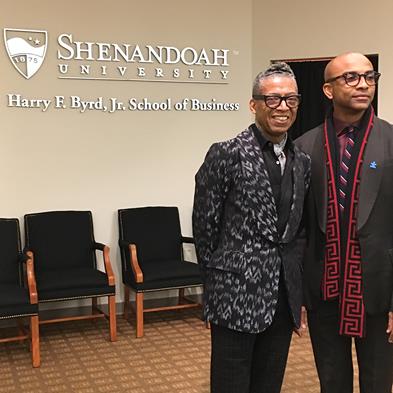 B Michael, left and Mark-Anthony Edwards, right, co-founders of B Michael America Fashion House in New York City, talk with Bell’s Clothing owners, Irvin and Sarah Shendow on Friday. Several of B Michael’s couture are now available for order at the Loudoun Street Mall store.

“I never thought of myself as a black designer. I saw myself as a designer, eager to work.”

Those were the words of renowned New York fashion designer B Michael when he visited Winchester on Friday with his business and life partner, Mark-Anthony Edwards.
When Michael branched out from designing luxury women’s wear and introduced a line of affordable, ready-to-wear fashions at Macy’s, he said the color of his skin presented an unexpected challenge to the success of his company, B Michael America.
Even though his dresses had attracted dedicated celebrity followers including Beyonce, Halle Berry, Cicely Tyson, Lena Horne and Brandy.
Even though he designed Whitney Houston’s wardrobe for her final film, “Sparkle”.
Even though he made the extravagant hats that helped make the 1980s TV series “Dynasty” a prime-time fashion icon.
Even though film director Tyler Perry was so impressed with his work that the movie “Madea’s Family Reunion” includes the line, “B Micheal is a genius”.
Still, Michael found himself placed on the “diversity” roster of female and minority designers whose clothes are sold at Macy’s department stores.
Edwards said being marginalized meant Macy’s would most likely not give the same priority to marketing Michael’s fashions as it would for non-minority designers like Michael Kors or Calvin Klein.
It wasn’t because of racism, but rather the preconceived notion that black designers — Heron Preston and Jerry Lorenzo, for example — create urban wear rather than stylish dresses for social occasions or business meetings.
“It’s easy to cast a black designer as street wear because, at the very least, you think that’s a natural market that the designer would have access to and reach for,” Michael said.
But the customers Michael designs for are women of style, grace and class. If Audrey Hepburn were alive today, he said, she might wear his dresses.
B Michael America’s business model is one that many mass-market retailers can’t grasp.
“When you’re a black designer doing luxury wear, there’s no context for that,” Michael said.
What makes the misconception particularly frustrating, Edwards said, is that black designers of luxury fashions have been around for almost two centuries. For example, Elizabeth Keckley was a freed slave who designed dresses for first lady Mary Todd Lincoln during the Civil War.
“We’ve always existed,” Michael said, “but in terms of building our own brand, that’s still a challenge.”
In November, Michael and Edwards won Shenandoah University’s Harry F. Byrd Jr. School of Business 2017 Entrepreneur of the Year Award.

(Shenandoah University junior Nathaniel Hill of Gaithersburg, Md., right, listens to a presentation by Fashion designer B Michael and Mark Anthony Edwards, CEO of B Michael America, about growing a fashion brand in a global marketplace Friday.)
On Friday, (April 14th) B Michael and Mark Edwards returned to the school to offer advice to business students.
“I have been, as a designer, working all your lives,” Michael told a classroom full of aspiring entrepreneurs in their late teens and early 20s.
Michael and Edwards explained how they melded the artistry of couture with the logistics of a business plan to turn their New York City fashion house into a global brand for wealthy women with the resources to spend thousands of dollars on a dress.
Michael said his ultimate goal was “to make sure I have a brand I can leave as a legacy.”
To make that happen, Edwards, the business-minded CEO of B Michael America, told him when they became partners in 2009 they would need to expand their clothing line into the retail sector.
“Even though the luxury space is incredibly lucrative, the industry is driven by the watches and sunglasses and more affordable things,” Edwards said. “It’s the springboard for everything else.”
They started talking to Macy’s, and that’s when they learned about the fashion industry’s color barrier.
Not only were they faced with the prospect of being placed on the “diversity” roster, Michael and Edwards also realized they lacked the capital of the other big-name fashion brands being sold at Macy’s.
Dozens of today’s top clothing names — DKNY, Dior, Marc Jacobs, Gucci, Louis Vuitton, Stella McCartney and Jimmy Choo, to name just a few — have been purchased by six multibillion-dollar corporations: LVMH, Kering, Richemont, Puig, Labelux and OTB.
“These conglomerates buy up these brands and they just put them out there,” Edwards said. “The industry is so expensive to participate in from a ready-to-wear perspective.”
The money behind those brands forces independent designers to fight harder for equal visibility.
“It’s even worse when you’re a designer of color,” Edwards said.
Rather than accept marginalization, Edwards and Michael decided to work with Macy’s to ensure their clothing would not be overlooked.
“You meet in the middle somewhere in terms of where you want to position your brand,” Michael said.
Once they made it into Macy’s four years ago, Michael and Edwards started racking up sales to customers who cared more about how a dress looked than the color of its designer.
“Once you get to the consumer side, the consumer is responding to the product,” Michael said. “Either she likes it or not.”

If you’re interested in buying a custom-made B Michael America dress, go to the Loudoun Street Mall.
On Friday, Bell’s clothing store at 122 N. Loudoun St. received its first rack of B Michael dresses, as well as a visit from Michael and Edwards themselves.
“We believe in independent specialty stores,” Michael said. “The brick-and-mortar [businesses] that are really sustaining themselves in this world are the smaller stores that have a specific niche. When you go into a store like Bell’s, you expect to have an experience. You won’t get that online.”
Edwards said independent stores also focus more on design and less on the story and marketing behind a brand.
“The buyers for specialty stores will go after designers that are very unique, designers that are doing amazing things,” he said. “They know their customers … have very specific tastes. If you’re talking about a woman, she is dressing for other women, not for men. She wants to make sure that when she walks into a room, she has on an amazing dress that no one else has on.”
Bell’s President Irvin Shendow said the only color he cares about is green, the color of money.
“I’m looking at the product,” Shendow said. “If the public accepts it and I can sell it, that’s what I’m all about.”
His wife, Bell’s Vice President Sarah Shendow, said she’s eager to see how her customers respond to Michael’s dresses.
“I think they [Michael and Edwards] understand the types of things women are looking for — multipurpose, things they can wear for multiple occasions,” Sarah Shendow said. “They should go over well.”
The dresses at Bell’s are just samples. Customers choose a style and the outfits will be custom-made in the colors of their choice at B Michael America in New York.
“They told us to allow for about four weeks [turnaround] time,” Sarah Shendow said.
Anyone interested in a B Michael America dress needs to understand that quality comes at a cost.
“Because they use very nice fabrics, the prices will be above some things that people are accustomed to,” Sarah Shendow said.
She declined to give specific prices for the custom-made dresses, but online costs for Michael’s ready-to-wear items at Macy’s range from $250 to $750.

During two classroom sessions Friday at Shenandoah University, Edwards asked the students if any of them were wearing something created by a designer of color.
Only one of the dozens of people who attended the presentations raised a hand.
Malik Sims is a 22-year-old Shenandoah University senior from Suitland, Md., who has already created his own fashion line, Premature Millionaire.
“I design urban street wear, clothing for the youth to give people hope,” said Sims, who was wearing a T-shirt of his own creation with the company’s slogan, “Do You Speak Millionaire?”
After hearing Michael’s and Edwards’ presentation, Sims said he realized for the first time that being a designer of color could present Premature Millionaire with challenges he wasn’t anticipating.
He remains undeterred.
“I’ll never give up,” Sims said. “That’s the struggle I’m going to go through, and it’s going to feel good when I see a ‘Do You Speak Millionaire?’ shirt at Nordstrom [department store].”
Michael said he has made peace with the “black designer” label placed upon him by the fashion industry.
“I am a black designer in the sense that I’m a male designer, I’m an American designer,” he said. “I think there’s a need to call focus to how America responds to black designers, or doesn’t respond. For me to talk about that, I need to embrace that.”
“It’s taking this label, turning it around and using it as your power,” Edwards said. “Know your power, know your worth.”