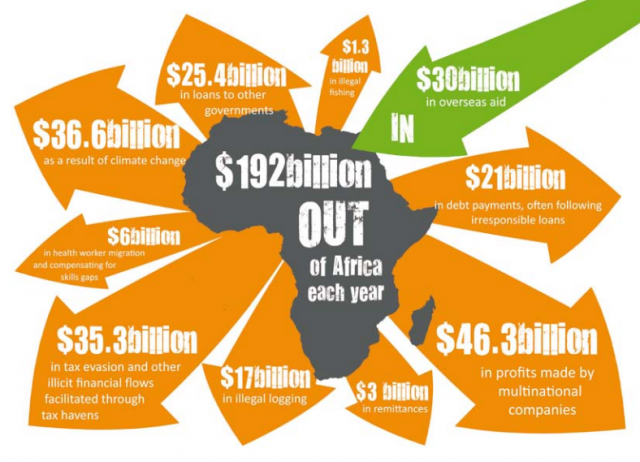 This 2014 report carried out by the Curtis Research, Health Poverty Action and other parters looks at the amount Africa loses to the rest of the world, in comparison with what it receives in aid and other inflows – is a response to a growing unease we have at Health Poverty Action that the UK public is not hearing the truth about our financial relationship with Africa. And hence what really needs to happen in order for global poverty to be tackled.
We are guilty of presenting ourselves as generous benefactors to the world’s poor. We present the aid budget as an act of charity, of which the UK should be proud: there are people worse off than us so we are selflessly giving to support them year after year. And yet, what this report demonstrates quite clearly, is that – in comparison with what it loses – the amount Africa receives back in aid is negligible. The truth is that rich nations take much more from Africa than they give in aid – including through tax dodging, debt repayments, brain drain, and the unfair costs of climate change – all of which rich nations benefit from.
The UK’s international aid budget is under attack from those who say that during a time of austerity, our generosity to poorer parts of the world is something we can no longer afford. All three leaders of the main political parties have resolutely defended the UK’s proud record as a donor. And the international NGO sector publicly applauds. This is the narrative we will take with us into the general election. The debate about how the UK should show leadership in tackling global poverty will be limited to arguments about how much we should give. This is a dishonest dialogue and reinforces in the mind of the public that Africa is a problem that costs us money. It hides the truth: that we take much more than we give.
If politicians really want to outdo each other in demonstrating their desire to tackle global poverty then they need to accept their role in perpetuating it, and commit to reforming those international systems that cost Africa resources. And the UK’s international NGO sector must pressure them to do so. The reality is that Africai is being drained of resources by the rest of the world. It is losing far more each year than it is receiving. While $134 billion flows into the continent each year, predominantly in the form of loans, foreign investment and aid; $192 billion is taken out, mainly in profits made by foreign companies, tax dodging and the costs of adapting to climate change. The result is that Africa suffers a net loss of $58 billion a year.
As such, the idea that we are aiding Africa is flawed; it is Africa that is aiding the rest of the world. Whilst we are led to believe that ‘aid’ from the UKii and other rich countries to the continent is a mark of our generosity, our research shows that this is a deception. Wealthy countries, including the UK, benefit from many of Africa’s losses. While aid to Africa amounts to less than $30 billion per year, the continent is losing $192 billion annually in other resource flows, mainly to the same countries providing that aid. This means African citizens are losing almost six and a half times what their countries receive in aid each year, or for every £100 given in aid, £640 is given back.
This demands that we rethink our role in addressing poverty in Africa. i. In this report we use ‘Africa’ to refer to the 47 countries classified as ‘sub-Saharan Africa’ by the World Bank. We have chosen not to use the term ‘Sub-Saharan Africa due to the numerous problems associated with this term. However we recognise that ‘Africa’ is also problematic given that this report does not include North Africa. ii. As a coalition of UK and African NGOs we have chosen in the narrative to emphasize the UK’s role; however this critique may also apply to other donor countries. Executive summary The idea that we are aiding Africa is flawed.
The full report can be downloaded here…
Source: CurtisReport.org

The Rapid Rise Of Jofra Archer