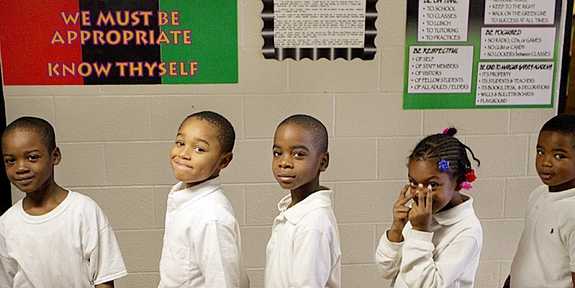 At Marcus Garvey Academy in Detroit, the week begins with the recitation of black history facts followed by the sounds of drummers summoning students to an assembly.

Students sing the black national anthem and recite the school creed, which starts, “I will have faith in myself. … I can learn! I will learn! I must learn!” This is before any reading, writing and arithmetic.
Garvey is an African-centered educational environment, and in 2008, its students outperformed the state average in most categories on the MEAP. Three other African-centered schools in Detroit serving students in kindergarten through eighth grade fared better than the Detroit Public Schools average.
Staff, parents and students at Garvey credit the school’s Afrocentric curriculum for setting high expectations and instilling the self-confidence that students need to excel.
Proponents of Afrocentric schools maintain that these schools represent a solution to achievement and discipline problems in urban districts like Detroit Public Schools. African-centered schools outperform others because of their family-oriented environment, said Haki Madhubuti, a nationally renowned educator.
“It is critical that you love yourself. … If you have humanity, you don’t go out and shoot people,” he said.
Afrocentric schools focus on pride
Students at Garvey must walk on a stripe called the green line to success, painted on hallway floors. They must stand and say, “Jambo,” a greeting in kiswahili, to any adult upon the elder’s first visit to their class.
And every subject and bulletin board includes mention of African or African-American history or culture.
Principal James Hearn maintains that the character development, high expectations and discipline embedded in the African-centered curriculum and culture at Garvey can transform other Detroit public schools.
“When you show them you’re not playing, they conform,” Hearn said of students.
Open to anyone in the Detroit Public Schools district, Garvey has surpassed DPS and state scores on the MEAP in many areas, despite moving and merging three times in the last eight years and high poverty rates among students. More than 86% are economically disadvantaged.
Educational villages
Garvey is among five African-centered schools in the district that serve students in kindergarten through eighth grades. All are named for African Americans; the others are Catherine C. Blackwell, Malcolm X, Paul Robeson and Erma Henderson. Garvey opened in 1991 after research showed the benefits of an Afrocentric educational program.
All of the schools except Henderson met annual yearly progress standards last year, and the Skillman Foundation has recognized Garvey, Malcolm X and Blackwell in its Good Schools campaign that awards well-performing schools with grants of up to $100,000. At the same time, 31% — or 51 of 163 eligible DPS buildings — met annual yearly progress standards last year.
As DPS faces crippling enrollment declines and the nation’s worst test scores and graduation rates, proponents of African-centered schools maintain that these schools represent a solution to DPS’s achievement problems. The goal of Afrocentric education is to infuse pride and self-determination in the students — nearly all of whom are African American, Hearn said.
The schools use the Nguzo Saba — the seven principles of Kwanzaa, a celebration of heritage and culture — and an Egyptian values system, while also incorporating African and African-American history into daily lessons. There also are rites of passage programs that include manhood and womanhood training.
Haki Madhubuti, a nationally renowned author and educator who helped train teachers when African-centered schools were being established in DPS 20 years ago, co-founded four Afrocentric schools in Chicago. He said the schools work because they are set up to be an extended family and though secular, they operate similar to parochial and Jewish-centered private schools.
“We demonstrate that it is critical that you love yourself,” he said. “Most certainly, we’re not anti-white. We’re not anti-anybody. We’re just pro-black people, pro-progressive people. Some of our teachers are white.”
Freda Dawson, principal at Malcolm X, agreed that the family structure within the school is paramount. At Malcolm X, students call the teachers “Mama,” meaning mother in kiswahili, or “Baba” meaning father. Parents sign a covenant, promising to do three hours of service a month for the school or in the school; if they fail, the staff can ask their child to leave the school.
“The combined efforts of parents, community and staff is definitely a plus for making our kids successful,” Dawson said, adding that most parents abide by the covenant.
Schools models for others?
Experts who have studied DPS’s educational plans have noted the success.
A 2005 governor’s Transition Team report recommended expanding the use of African-centered education in DPS. And a 2008 Council of the Great City Schools report on DPS said “the district has an African-centered program that can be interwoven into all content areas.”
And now, DPS’s newly appointed central administration is reviewing the schools’ curriculum — amid requests for expansion to include a high school — to determine whether it should be expanded, and whether it is the staff or curriculum or culture that makes the schools succeed.
Last summer, when 29 Detroit public schools closed, Garvey moved to the former Butzel Middle School building and ballooned from 265 students to more than 700, with 30 to 35 children in a class. The school’s challenges also grew — there are now enough special-education students to fill nine classrooms. In addition, kids from warring gang territories merged into the school and now sit side by side.
“The first few months, we were … constantly breaking up fights,” said school social worker Ifetayo Chaffin.