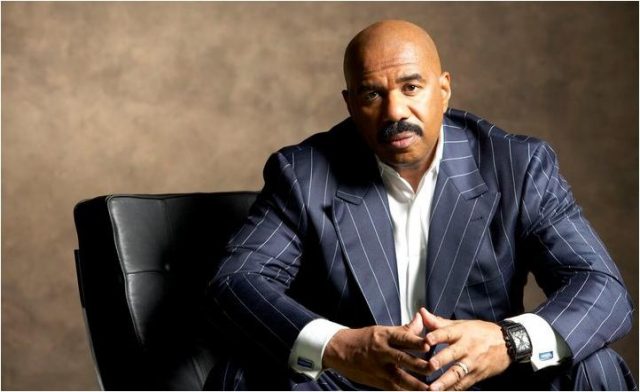 Steve Harvey has been a boxer, an insurance salesman, a carpet cleaner, and a mailman.  There are many reasons to appreciate the rise and rise of this man.  Not just for his Comedy Career which started the ball rolling, but for his books,  his philanthropy, his relevance on  radio and TV and his business endeavours.

In the late 1980s Harvey was homeless for multiple years. Harvey first performed stand-up comedy on October 8, 1985 at the Hilarities Comedy Club in Cleveland, Ohio.  He slept in his 1976 Ford when not performing gigs that provided a hotel, and he showered at gas stations or swimming pool showers. Rich and Becky Liss helped Harvey during this time with a contract for carpet cleaning and credit at a travel agency.
Comedy career
He entered talent competitions, and his break soon came. He was a finalist in Second Annual Johnnie Walker National Comedy Search performing on April 16, 1990, eventually leading to a long stint as host of It’s Showtime at the Apollo, succeeding Mark Curry in that role. His success as a stand-up comedian led to a starring role on the ABC show Me and the Boys in 1994. He would later star on the WB network show, The Steve Harvey Show, which ran from 1996 to 2002. While popular, the show never achieved critical acclaim outside of the African-American community.
He was part of the Kings of Comedy touring group. He has appeared in movies, with the 2003 movie The Fighting Temptations alongside Cuba Gooding Jr. and Beyoncé Knowles as most notable. He achieved further critical and commercial success through his book Act Like a Lady, Think Like a Man and its subsequent cinematic follow-up Think Like a Man, an ensemble romantic comedy depicting characters taking advice on dating from the book.
On August 2, 2012, Harvey performed his final stand-up act at the MGM Grand in Las Vegas, ending a 27-year career as a stand-up comedian. The two-hour performance was broadcast live on Pay-Per-View. “The road to this final show has been an amazing journey, doing stand-up for the past 27 years, and I can’t thank fans enough after reflecting on all those years on stage,” he said.
Steve Harvey, well-known for his side-splitting comedy, has broken the mould, reinvented himself, and now demonstrates his savvy business sense, and genuine passion for helping others. We commend Steve for what he is doing, and would encourage other stars to do the same. We have seen the signs of well-earned wealth from sports stars and entertainers. The programme Cribs has shown us the giant mansions, the 12 cars in the drive and sometimes the private jet. But if more stars were like Steve Harvey, those suffering in America would have a better chance in life.
Here follows 10 things that Steve Harvey can be proud of. (There may of course be more)
1) Radio Host: Steve Harvey Morning Show
Harvey started hosting this current run of his syndicated radio show in 2010
He is the host of a weekday-morning radio program, The Steve Harvey Morning Show, was originally syndicated through Radio One, Inc. (from September 2000 until May 2005) and which continues to air to the present time.
2) TV Host: Family Feud
Harvey began hosting Family Feud in September 2010. The show has seen significantly improved ratings under Harvey. As of November 2012, it was the second most-watched daytime syndicated show.
3) Author
4) Relationship Adviser
Act Like a Lady, Think Like a Man book’s runaway success added another dimension to his life and career, as a relationship advisor. Extending his role, Harvey made multiple appearances on Good Morning America and other TV programmes as a contributor on family and relationships; he continues a relationship column in Essence Magazine.
5) Dating website LocateYourLove.com
Launched in September 2014, the site is new concept of dating website to help people become more dateable.
6) The Steve & Marjorie Harvey Foundation
Long dedicated to philanthropy, Harvey continues his unending pursuit to further uplifting, educational opportunities with youth through The Steve & Marjorie Harvey Foundation. Created to make a difference in young lives across America. Sparked by horrible statistics coming from the youth of Black America.
7) Mentoring Weekend for Young Men
He launched The Steve Harvey Mentoring Weekend for Young Men in 2009, a camp for teenage boys from around the country who are without fathers, to share insights and skills to navigate manhood. Harvey plans to continue the initiative, to create satellite programs in 10 additional cities.
8) Girls Who Rule the World”
Another signature program that the Steve and Marjorie Harvey Foundation created is “Girls Who Rule the World” (GWRTW), an annual mentoring weekend for 100 young girls ages 13-18 residing in Atlanta, Georgia and surrounding areas. This program helps girls develop skill sets to navigate through issues of self-esteem, financial literacy, health and wellness, and professional and educational development.
9) Scholarships
Also now established is a Scholarship and Endowment Fund at Spelman College. The scholarship is available to female juniors and seniors who are at risk of not completing their degrees due to a disruption in personal funding. She has also personally endowed single mothers who are seeking to further their education with full scholarships.
10) Clothing Brand – The Steve Harvey Collection
While working on all of these projects, Harvey has not lost sight of his passion for fashion and continues to expand his clothing and accessories brand, The Steve Harvey Collection, providing quality choices for men and young boys to look sharp.

Why Your Startup Needs an ePOS System