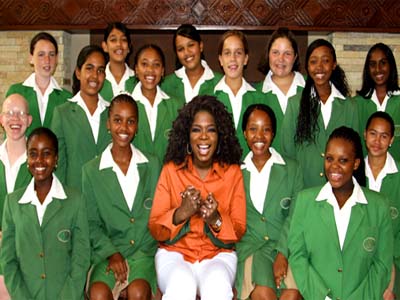 A little-known statistic even the most altruistic don’t realize until they wade into heavy-duty giving: The majority of philanthropic initiatives don’t work; 75% close up shop in their first year. Even so, there’s merit in the effort: As in business, failures lead to insights and breakthroughs. With her immense wealth, Oprah has sort to make a difference in lives through education and various other charitable projects.

Oprah’s Angel Network
In 1998, Winfrey created the Oprah’s Angel Network, a charity that supported charitable projects and provided grants to nonprofit organizations around the world. Oprah’s Angel Network raised more than $80,000,000 ($1 million of which was donated by Jon Bon Jovi). Winfrey personally covered all administrative costs associated with the charity, so 100% of all funds raised went to charity programs. The charity stopped accepting donations in May 2010 and was later dissolved.
In 2004, Winfrey became the first black person to rank among the 50 most generous Americans and she remained among the top 50 until 2010.
By 2012 she had given away about $400 million to educational causes.
In 2005, in the wake of Hurricane Katrina, Oprah created the Oprah Angel Network Katrina registry which raised more than $11 million for relief efforts. Winfrey personally gave $10 million to the cause. Homes were built in Texas, Mississippi, Louisiana, Alabama before the one-year anniversary of Hurricanes Katrina and Rita.
Winfrey visited evacuees from New Orleans temporarily sheltered at the Reliant center in Houston following Hurricane Katrina.
Oprah Winfrey Leadership Academy for Girls in South Africa
Growing up in Kosciusko, Miss., Winfrey’s childhood wasn’t far removed from the average South African. She lived on a farm without indoor plumbing and watched her grandmother, who largely raised her, hand-wash her clothes. At 9 she was raped by a cousin, then she endured continued abuse until at 14 she gave birth to a son, who died after childbirth. Her way out came in the form of a federal program that gained her access to a rich suburban school, where she was one of only a handful of African-Americans. Each day she bounced between a home of poverty and a classroom of possibilities. Here she discovered a knack for public speaking and debate, which earned her a part-time radio gig and, later, a scholarship to Tennessee State University.
In 2004, Winfrey and her team filmed an episode of her show, Oprah’s Christmas Kindness , in which Winfrey travelled to South Africa to bring attention to the plight of young children affected by poverty and AIDS. During the 21-day trip, Winfrey and her crew visited schools and orphanages in poverty-stricken areas, and distributed Christmas presents to 50,000 children, with dolls for the girls and soccer balls for the boys, and school supplies. Throughout the show, Winfrey appealed to viewers to donate money to Oprah’s Angel Network for poor and AIDS-affected children in Africa. From that show alone, viewers around the world donated over $7,000,000.
Communication was an issue: The 152 12- and 13-year-old girls, hand-picked by Winfrey herself from an application pool of 3,500, came from all nine South African provinces, speaking all 11 of the country’s official mother tongues. When Winfrey and her team started recruiting for the school, in 2006, she was adamant that she’d accept only the brightest but most disadvantaged kids: those at the top of their public school class but from households with an income of less than $950 a month.
There were horrendous problems which plagued the early years.  Police investigations, accusations of sexual and physical abuse taking place at the school, pregnant girls, being sued by a former headteacher, She could have given up then, and walked away, but Winfrey, rather than chalk up her school as a costly life lesson, quietly redoubled her efforts to make it work.
Winfrey invested $40 million and some of her time establishing the Oprah Winfrey Leadership Academy for Girls in Henley on Klip south of Johannesburg, South Africa. The school set over 22 acres, opened in January 2007 with an enrollment of 150 pupils (increasing to 450) and features state-of-the-art classrooms, computer and science laboratories, a library, theatre and beauty salon. Nelson Mandela praised Winfrey for overcoming her own disadvantaged youth to become a benefactor for others.
Critics considered the school elitist and unnecessarily luxurious. Winfrey rejected the claims, saying: “If you are surrounded by beautiful things and wonderful teachers who inspire you, that beauty brings out the beauty in you.” Winfrey, who has no surviving biological children, described maternal feelings towards the girls at Oprah Winfrey Leadership Academy for Girls. Winfrey teaches a class at the school via satellite.
Winfrey considers building the school without community buy-in another one of her early mistakes (“I could write a book, ’101 Mistakes,’” she says). Today the girls volunteer at a children’s home in nearby Meyerton. Local kids are invited to use the school’s top-notch dance studio in off-peak hours. Winfrey has also built two public schools at a cost of just over $3 million each as a model for the South African government to show what is possible for well under a $40 million price tag. When the school day ends at one of those pilot schools, the campus hosts adult education classes.
Winfrey’s expenditures have shot past $105 million as she shoulders college tuitions for the first time. But she’s now seeing the return on her investment.
To help more students, Winfrey is reaching out to corporations and wealthy individuals in South Africa, hoping to boost the school’s endowment. Her fellow billionaires are pitching in, too: Michael Dell donated laptops, Spanx inventor Sara Blakely cut a $1 million check and Amazon’s Jeff Bezos gave each girl a Kindle. Winfrey, meanwhile, is mulling her next big move: a school in the U.S., possibly in her home state of Mississippi.
As of 2012, Winfrey had also given over 400 scholarships to Morehouse College in Atlanta, Georgia. Winfrey was the recipient of the first Bob Hope Humanitarian Award at the 2002 Emmy Awards for services to television and film. To celebrate two decades on national TV, and to thank her employees for their hard work, Winfrey took her staff and their families (1065 people in total) on vacation to Hawaii in the summer of 2006.
In 2013, Winfrey donated $12 million to the Smithsonian’s National Museum of African American History and Culture.
Source: Forbes, Wikepedia

It’s no secret that Cryptocurrency is fast becoming what it was created to not...