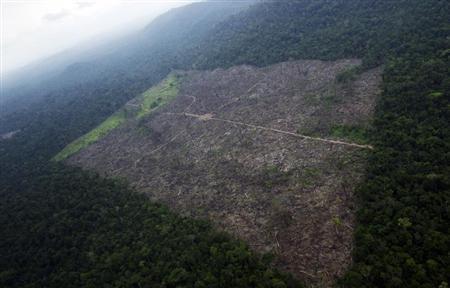 Rising foreign demand for beef and soybeans will tempt Brazil to clear more of the Amazon rainforest, in a reversal of recent success in slowing forest losses, a study said on Thursday.
About 30 percent of deforestation in Brazil in the decade to 2010 was due to farmers and ranchers seeking land to expand export production of beef and soybeans, against about 20 percent in the 1990s, the report said.

“Trade is emerging as a key driver of deforestation in Brazil,” according to experts at the Center for International Climate and Environmental Research, Oslo (Cicero).
“This may indirectly contribute to loss of the forests that industrialized countries are seeking to protect through international agreements,” they wrote in the journal Environmental Research Letters.
Exports of beef and soybeans accounted for 2.7 billion metric tons (1 metric ton = 1.102 tons) of carbon emissions caused by Brazil’s deforestation in the decade to 2010, the report said. That exceeds greenhouse gas emissions of a nation such as Egypt over the same period.
Deforestation of Brazil’s Amazon region fell 27 percent to 1,798 square miles between August 2011 and July 2012 from the same period a year earlier, the Brazilian Environment Ministry said in November.
That was the lowest since monitoring began in 1988. Brazil’s so-called Legal Amazon covers 5.2 million square kilometers.
But growing foreign demand and the Brazilian government’s eagerness for economic growth meant continued falls in the rate of forest loss were unlikely without new measures to safeguard forests, the report said.
Worldwide, deforestation accounts for up to a fifth of greenhouse gas emissions from human sources, according to U.N. estimates. Trees soak up carbon dioxide as they grow and release it when they burn or rot.
Under U.N. climate change rules, greenhouse gas emissions count as those within national boundaries. Suggestions of shifting responsibility to consumers, for instance foreign buyers of Brazil’s beef, are often dismissed as too complicated.
“It’s been a bugbear in the forest sector,” said Duncan Macqueen, a forest researcher at the International Institute for Environment and Development in Edinburgh. “Consumers ask ‘why should we suffer the cost of reforming the system?'” he said.
Some schemes seek to certify forest production as coming from a source that does not involve illegal logging. But these have drawbacks since the costs of audits can be prohibitive for small producers, he said.
The Cicero study suggested better labeling or information about imports to guide consumers.
The study did not try to compare the environmental impact of Brazil’s beef or soybean production with that other nations to see where production was least damaging. “Similar analyses still have to be done,” lead author Jonas Karstensen told Reuters.