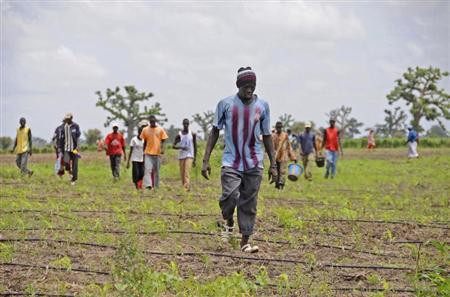 President Barack Obama hosts the leaders of four African nations this week, all of which are cited in a new report for effectively increasing spending on agriculture to combat extreme poverty and hunger.
The report by the ONE Campaign, an anti-poverty group co-founded by Irish rockers Bono and Bob Geldof, said Senegal, Malawi, Cape Verde and Sierra Leone either met or were close to meeting targets for increased budget spending on agriculture.

All of the countries, except Cape Verde where there is little data, are also on track or close to meeting a U.N. target of halving extreme poverty by 2015, the report said.
The African leaders will visit the White House on Thursday to showcase their fledgling democracies, but also their potential in a region where strong economic policies are attracting increased investment.
A recent World Bank report said Africa’s agricultural sector could become a $1 trillion industry by 2030 if farmers modernized their practices and had better access to financing, new technology, irrigation and fertilizers.
“Despite record improvements by select African countries, Africa overall is still far from realizing its agricultural potential,” said the ONE Campaign report, which assessed progress by 19 African countries and donors that send them aid.
“For African governments, donors and the private sector alike, 2013 is the year to deliver on these building blocks that impact farming and expand economic opportunities for farmers,” the report said.
This year marks a decade since African governments committed to allocate 10 percent of national spending to boost agricultural production, reversing decades of under investment in the sector. The so-called Maputo commitments expire this year, giving world leaders the opportunity to lay out a bold new plan with targets, the report said.
According to ONE’s analysis, at least four of the 19 African countries analyzed – Ethiopia, Cape Verde, Malawi and Niger – met or exceeded the target of 10 percent total expenditure on agriculture. Senegal and Sierra Leone are close to the target.
Meanwhile, the laggards are Nigeria, Liberia and Ghana, which spend less than 2 percent of their budgets on agriculture.
The report also called on industrialized nations – the United States, France, Britain, Canada,Japan, Germany and Russia – to make good on their various funding promises to help African nations increase agricultural production.
The G8, which meets in June this year, has repeatedly promised to support Africa-led initiatives, yet G8 agriculture investment plans have only secured about half of their required financing, and many donors contribute only a small fraction of their agriculture aid to poor countries, the report said.
The report shows that European Union institutions, Canada and Germany increased their share of foreign assistance to agriculture, while Britain, Japan and France cut theirs.