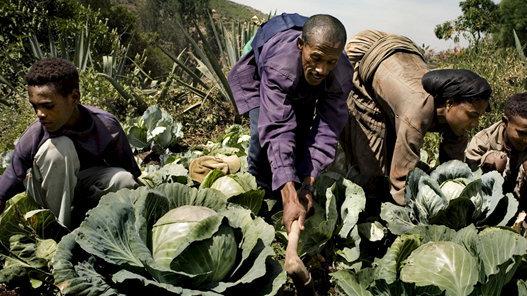 Despite some steps that Ethiopia has been taking towards economic development, the country is one of the poorest countries in the world. The poor live in the rural areas and make a living by primitive small-scale farming or as pastoral people. The small-scale agriculture provides livelihoods for over 80% of the total population, which is estimated to be 84 million.

The battle against food insecurity is one of the greatest challenges facing Ethiopia. Every year more than 10 million people depend upon relief food assistance; and even more people starve when the country is hit by drought or floods. The country’s too much dependency on rain for farming and water resource has made it extremely vulnerable to negative effects of climate changes. The unequipped poor to cope and adapt such conditions have been worsening the situation.
The great challenges of discrimination against and lack of support to people who suffer from HIV/AIDS is another of DanChurchAid’s focus programme area along with gender and capacity building interventions.
The Charities and Societies law introduced by the government in 2009 contains some restrictions and issues for further clarification. This makes it difficult for Non-Governmental Organizations (NGOs) to efficiently operate.

WHAT WE DO IN ETHIOPIA

DanChurchAid works in the mountainous highland in the north where we improve the living conditions of small farmers, and in the southern part of the country, where pastoral people struggle to survive in drought-stricken regions. To a large degree it is the local partners that enable us to reach the poorest in the rural areas.
DanChurchAid’s projects in Ethiopia fall under the following types of programme:

• Empowers vulnerable groups, in particular rural girls and women, to  protect themselves against the risk  of HIV/AIDS;
• Ensures that people infected and affected by HIV are protected from stigma and discrimination, have access to necessary health and social services  as well as economic interventions;
• Integrates gender issues in HIV/AIDS programmes to reduce women’s risk of HIV/AIDS infection.
• Ensures that the responsiveness of legal and moral structures to protect vulnerable groups from HIV/AIDS is increased.

Philanthropy and the Black Church