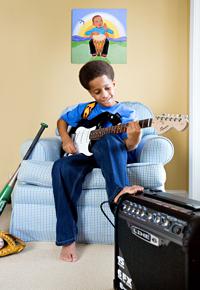 A friend of mine likes to tell the story of how when she was growing up, if there was a baby shower or a child’s birthday her mother would purchase a card with a white child–because there was nothing else available back then–and lightly shade in the image making the child African American.  30 years later while it’s easier to find greeting cards with images of people with dark skin, there are still gaps in the area of home decor for Black children.

Enter Kisha Holt, a former educator and mother of four who is now owner of kisha’s kids an online boutique which carries kids’ accessories and toys featuring multi-cultural images. The mission of kisha’s kids, according to the website, is “to beautify kids’ surroundings with images of kids who look like them, doing things they like to do and encouraging them to be the kids they were meant to be.” The goal it to boost kids’self-esteem.
Holt started her business after being frustrated time and again when trying to find home accessories to decorate her kids’ rooms.  She specifically wanted picture frames and wall art with images of children with brown skin, but after having four children, she still couldn’t find much.
“That to me was unacceptable,” Holt said in an interview with TNJ.com. “I was well aware of the need for children to be able to identify with themselves and their environment.”  As an alternative Holt would purchase decorations with flowers and animals.  But with each pregnancy she’d begin the search anew for kid’s home decor featuring African-American children. “By the fourth child I’d go online thinking I could find something, but never could,” she said.

Necessity leads to invention
When Holt initially came up with the idea to help African-American parents decorate their kid’s rooms, she thought she’d do some research, gather different products together and sell them online. Upon further research Holt said she discovered that there weren’t very many products to pull together.  She found a few things but nothing that she herself would purchase for her home. That’s when she realized if she wanted certain items made a particular way, she’d have to find artists to create the desired images and then manufacture the products herself.
Following the information trail
Like most success stories, while Holt knew what she wanted, she had no idea at first how she would get from A to Z.  “I didn’t know anything about any of this,” she said. “I taught elementary school. I earned my masters degree and became a reading specialist. That was what I knew. I didn’t know retail it was really kind of scary once I realized what I would have to do.”
Holt started with the internet saying that Google was her best friend during the research process.  She’d look on baby sites, finding products she liked. Next she’d find out who made the product and Google their website. Then to further her research she started calling places to ask questions.  At first most of the manufacturers she called couldn’t help but her mantra was “eventually someone’s going to help me and we’re going to do this,” and that’s what happened.  Even if the person couldn’t help, she’d always find out who to call next.
During all of this she kept a notebook documenting the various research stages.  With each phone call she gathered more information and felt more confident until finally she could make a phone call and describe exactly what she needed.  “Eventually I found people who would do it,” she said and it was a team effort.  For the artwork she hired  several artists, most notably, Lizzy Rockwell who is the author and illustrator of many children’s books.
Holt was also able to find manufacturers who created products solely for her company using the images she’d commissioned. Thus, kisha’s kids is the manufacturer of many of the products which are exclusive to her store.  Since she is the manufacturer, Holt could sell her products to retailers at wholesale, an option she’s considering in the future.  When the products were ready to be sold, Vanessa M. Lam took all of the photos for the kisha’s kids website.
“It was so gratifying because it was so scary initially,” she said.  “Eventually the doors did open and it was exciting to see it happening.”  Now kisha’s kids is expanding by adding a line of t-shirts.  The shirts will feature four girls of different ethnicities–African American, Latino, Asian and Caucasian.  “It’s not about my race is better than yours,” Holt explained. “Everyone should be able to see themselves in the things that are around them and be able to be proud of who they are.  It’s a celebration of self,” she said referencing the motto for her company which is “see yourself! be yourself!”
Mompreneur
Holt works about 30 hours a week interspersed throughout a busy day of dropping the older children off at school, trips to the park with the younger children and other activities.  She gets much of her work done while on the run. “I’ll get to places early and I keep things in the car. My Blackberry is like my best friend. I’m always working on that and sending emails,” Holt said.
Her children are in full support of the enterprise.  In fact Holt says she asks for their input and uses their ideas.  All of the themes the artists use for images are based on things her children are interested in such as ballet and baseball.  And when one child announced that he’d like to one day be a fire fighter. That image was used for an area rug.
Holt is also glad to be a role model for her children showing them that it’s possible for a woman to own and business and be a mother.  “It’s the best of both worlds,” she said.  “It’s really great, I love what I’m able to do.  It’s a business about my kids. It was born out the need to service the things that I knew were important to their growth and development,” she said.

The Influential Black Fashion Designers You Should Know