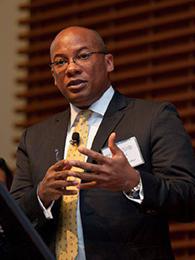 Making the Business Case for Africa

The for-profit sector steps up to play its role in Africa’s economic development.
Where are the builders of tomorrow’s Africa? That’s a crucial issue for anyone interested in global economic development. It was also the specific question up for discussion at the daylong Stanford Africa Forum held March 2 at the Stanford Graduate School of Business.

The answer, at least according to the roughly 250 people in attendance at the Saturday event: Everyone who is willing to roll up their sleeves and get to work.
A running theme of the day was that the “business case” for Africa has become compelling: Since 1990, the continent has had a 5.3% compound annual growth rate in the combined GDPs of its 50-plus countries. World Bank maps of Africa show a steadily increasing middle class and a growing list of countries taking steps to liberalize their economies; 7 of the world’s 10 fastest-growing economies are in Africa.
But the continent also has well-known problems, such as an underdeveloped education infrastructure and political systems too often rife with corruption. Neither factor helps with attracting private investments, which are perhaps one of the continent’s greatest needs. While the panels and presentations did not sugarcoat any of the challenges that Africa faces, there was a conscious effort to spotlight the many African economic and social indicators that are trending positively, said Maryanna Quigless, a second-year business school student who was one of the student planners. In that constructive spirit, speakers and panelists tended to come from for-profit companies, both on and off the continent, as opposed to the NGOs who are often over-represented at events about the developing world. This was in keeping with the observation by the keynote speaker, Nigerian entrepreneur Mitchell Elegbe, who listed the perpetual quest for foreign aid as one of the bad habits that Africa needs to break out of.
Elegbe, 42, is CEO of Interswitch Ltd. in Lagos, which provides electronic switching services between Nigerian banks. His is the kind of company that is taken for granted in the West; there are any number of such operations in the United States, Europe, and Asia. But before Interswitch was founded in 2001, there was no easy way for Nigerian banks to transfer funds electronically. That made it impossible for Nigerians to have many of the conveniences taken for granted elsewhere, such as ATMs and debit cards. But now, said Elegbe, those services are nearly as ubiquitous in Nigeria as they are in other parts of the world.
The implications are far-reaching. Apple’s iTunes, for example, recently began operating in Nigeria because it was able to count on companies like Interswitch to take care of the back-end payments that are crucial to its operations.
Even more significantly, said Elegbe, Western switching competitors like Visa and MasterCard, who previously had stayed out of Nigeria, due to its undeveloped infrastructure, are now partnering with Interswitch to open operations there. Despite their oppressive experience with colonialism, said Elegbe, most Africans today understand that they now need multinational corporations as partners in development if the continent is to live up to its potential.
Four panels covered technology, multicountry initiatives, investing opportunities, and media/entertainment. The last of those may well have been the liveliest, featuring the music of “Fuse ODG,” real name Richard Abiona, a U.K.-based Ghanaian musician responsible for an Afro-pop dance craze called “Azonto” that has been a huge hit in both Africa and Europe. Its popularity in the U.K. is such that Prime Minister David Cameron was photographed holding an Azonto T-shirt, and the BBC ran a story asking whether the dance trend would soon take over the world.
Abiona said that his music was part of an attempt to forge a new identity for Africa. “Rebels … wars — that is all I saw about Africa when growing up in London. But there is so much more to Africa, and that is what I am trying to show.”
That theme was echoed by another panelist in an entirely different context. Michelle Atagana is managing editor of the Cape Town-based Memeburn.com, which is sometimes described as Africa’s answer to TechCrunch, the popular technology blog.
“There are plenty of people in Africa doing a lot of innovative work in technology,” she said. “You just don’t hear about them because they don’t shout loud enough, and whoever shouts the loudest gets the most attention.”
“Silicon Valley needs to stop thinking of itself as the center of the world just because it builds bright shiny things like Instagram,” Atagana added. “Instagram may be a lot of fun, but it doesn’t exactly solve any of the world’s problems.”
The Africa Forum was hosted by the Stanford Graduate School of Business Africa Business Clubas well as Stanford Africa Business Forum. In addition to Quigless, other student planners of the 2013 forum were Samuel Dele Adeyemo, Temi Olatunder, and Elahe Popat.

Philanthropy and the Black Church