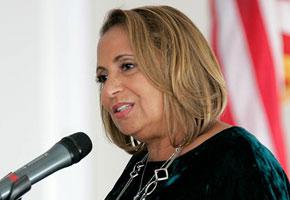 Catherine Hughes is the all-American success story. Through hard work and determination, she overcame severe financial constraints and founded the media company Radio One, Inc, the largest African-American owned and operated broadcast company in the U.S. She later expanded into TV One, a national cable and satellite television network for African American adults. Noting that there are too many negative portrayals of Black women in mainstream media, she says of Radio One and TV One programming, “We’re interested in the positive side of being African American.”

When Radio One went public in 1998, Hughes became the first African American woman to head a publicly traded corporation. She is also famous for creating The Quiet Storm – a format of sexy music and chatter that revolutionized urban radio in the 1980s.

Born in Omaha, Nebraska, Hughes moved to Washington, D.C., in 1971 and became a lecturer in the School of Communications at Howard University. She ventured into radio in 1973 as the general sales manager at WHUR, the university’s radio station, and two years later, she became the first female vice president and general manager of a station in the D.C. area. In 1980, she bought her first station, WOL AM, and changed the programming to an all news and talk format presenting issues from a Black perspective. She was the morning show host for 11 years; her theme was Information is Power.
Hughes, who laments that she has “no musical talent,” says of radio that she loved “the commercials, not the music”. She points out that Radio One is a case study for the Harvard Graduate School of Business, who told her, “Well, no wonder y’all did OK, because your love of radio was not the music, it was the commercials.”

In February 2012, Hughes received the NAACP Chairman’s Award in special recognition of her efforts to utilize her profession to promote diversity and community involvement. NAACP Chairman Roslyn M. Brock lauded Hughes for being “an advocate for small business entrepreneurship”, as well as an example of “the NAACP’s quest to celebrate and uplift individuals who model principles of hard work, perseverance and community empowerment.” For her part, Hughes was truly touched, noting that “those who have received the Chairman’s Award in the past are counted among the very best that America has ever produced”. She went on to remark that she was honored and very humbled to be included in their ranks.
In 2011, Hughes was appointed as chair of the U.S. Small Business Administration’s (SBA) Council on Underserved Communities (CUC). Hughes, who received an SBA loan in the 1980s, is thrilled that she can “help entrepreneurs in communities across the country take advantage of those same opportunities for success.”
During her journey to corporate executive, Hughes has had her share of challenges in an industry with few opportunities for Black women in business. Despite her considerable success, though, she refuses to be complacent. “The reason I have to keep driving forward is the reality that my community seems not to be making the progress for the masses we should be making considering how blessed more of us are each year.”