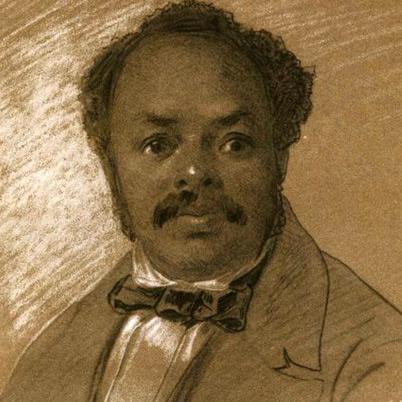 Born on July 24, 1807, in New York City, Ira Aldridge acted with the African Grove Theatre before making his 1833 London debut as Othello. Other Shakespearean roles followed, and Aldridge became a renowned thespian, touring countries like Austria and Russia and earning the nickname “African Roscius.” He also used his fame to call for slavery’s end. He died on August 7, 1867, while in Poland.

Born on July 24, 1807, in New York City, Ira Frederick Aldridge was an African-American actor known for his stage work. He was the son of a straw vendor and lay preacher. Remarkably for the times, Aldridge received an education. He attended at the African Free School.

In the early 1820s, Aldridge began his acting career with the African Grove Theatre, also known as the African Theatre. Feeling that America wasn’t a hospitable place for a black actor, however, he decided to seek his fortune elsewhere.

Emigrating to England, where he seemed to find more creative opportunities, Ira Aldridge had a starring role in Oroonoko in 1825, in London. This fine performance, however, failed to launch a career for him on the London stage. Aldridge ended up spending years touring the United Kingdom, playing the title role in suchShakespearean works as Othello, Macbeth and Richard III.

A well-regarded actor, Aldridge was called the “African Roscius” after the legendary Roman actor Quintus Roscius Gallus. He returned to London to play Othello in 1833, when he was only 26 years old, taking over the role for famed actor Edmund Kean, who had recently passed away. Returning to regional theater, Aldridge continued to perform Shakespeare‘s works. Some of his performances included samplings from several plays.

In 1852, Aldridge went on his first European tour. There, he earned great acclaim for his performances. Five years later, Aldridge took the stage in St. Petersburg, Russia, in a series of well-received shows. He spent little time in England, launching his last major tour of the United Kingdom in 1859.

Aldridge continued to perform until the end of his life. He died during an European tour on August 7, 1867, in Lodz, Poland. Aldridge had been twice married and left behind several children, including Luranah Aldridge, who later an opera singer of some renown.