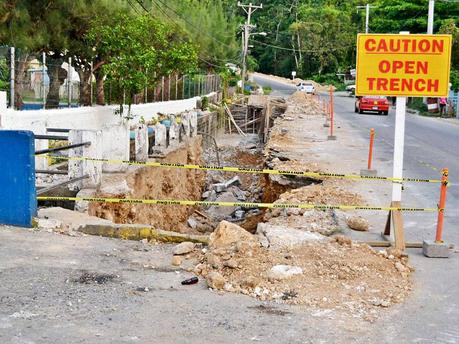 Though construction to aid water flow through Fern Gully, St Ann, is ongoing, residents remain concerned that there are only two months remaining before the start of the 2013 hurricane season.

“I don’t feel safe,” said sculptor, Ralph Cameron, who resides near the entrance to Fern Gully and runs a shop at that location.

“I actually sit here and watch two ah di worst water what come, two out ah three. The last one, about four years ago. The body ah water I see come down here, this drain, it will take a portion but not all of it. I believe when the drain complete we still going to have flooding because the drains should be wider. This (drain), I don’t see it carrying the water.”

Other residents, who live several hundred metres away, heading west into Ocho Rios, believe their area is safe.

“This particular area not usually affected by flooding so with the new drain, things will be even better,” said a man who declined to give his name. He was quick to point out that a drain already existed in that area and this had served to alleviate flooding.

He, however, expressed concern that with frequent stoppages affecting the project, there might be severe road damage should there be heavy showers while the project is under way.

Meanwhile, dust associated with the work has been affecting businesses on that stretch of road. One restaurant and bar operator said whereas the road was oiled some time ago, the dust is still rising. He said, since then, the contractor has been sprinkling the road but not as frequently as residents would like.

“It not so bad now,” the businessman said. “I operate a bar and I serve open drinks, mixed drinks, when my customers sit on the outside, the tables are covered with dust. The truck only comes one or two times a day. If the truck comes like 10:30, and wet the road, by 10:35 or 10:40 the road dry again so we’re left to suffer until the truck comes again, if it come again. It bad.”

There was also concern expressed by one resident about the timing of the work in the vicinity of the Ocho Rios Primary School.

“I don’t think it is wise for them to be doing that (work) right now because it’s too busy, too dusty and it’s school time. That section of work, at the school gate, should be done in the summer when school is on break,” said the concerned resident. “Furthermore, the dust is affecting us. There are people in the area being affected by sinus and asthma, and the dust is making it worse.”